Il Ridotto is an Absolute Gem 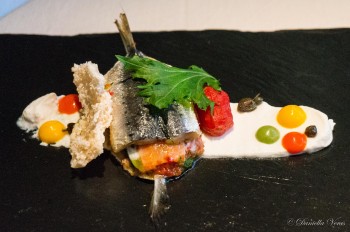 Il RidottoÂ is located just behind the sumptuous St. Mark’s Basilica in gorgeous Venice. This trendy spot just received its first vaunted Michelin Star this year and we have a feeling another one is on its way soon. The restaurantâ€™s light brick walls imbue a rustic ambiance with a modern chic dÃ©cor seating 24 inside. The warm, humble and camera-shy Chef Gianni Bonaccorsi greeted us with such an amiable and enchanting smile. Riccardo was our meticulous and handsome sever who kept us wanting for nothing all afternoon.

One of our favorite facets of this restaurant is that it is very affordable. They have lunch special where one can eat three tapas, one main and a mineral water for only 28 Euros! That is one of the best deals you will EVER find at a Michelin-starred restaurant. Almost all of the dishes are either 25 or 30 Euros and nothing is more than 35 Euros. There is also a 5-course tasting menu for only 70 Euros. These are insanely reasonable prices for a restaurant of this caliber.

The opening bread basket had wonderful toasted bread that was thicker than Texas Toast as well as addictive runway model (long and skinny) bread sticks that were served with sterling Sicilian olive oil, which was perfect for dippage.

We started off our feast with the Pea Soup with Mussels, Clams, Langoustine and Bread that was utterly superb. It was so smooth yet bursting with the deep complexity of the diverse seafood flavors. 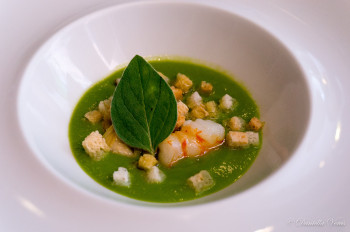 During our whirlwind culinary adventure throughout Italy, we found dishes that were so beautifully crafted, they should have their own exhibit in a museum. The Sardine Sandwich with “Panzanella” Vegetable served with Ricotta cheese and Candied Capers was one of these resplendent masterpieces. This inside-out sardine sandwich with sweet popped rice cake was such a delight to gaze upon and indulge. TheÂ multiple colors of pepper purees added a radiant complexion to this stunning dish. All the different textures and seasonings swirled around in our mouths in an enrapturing fashion. 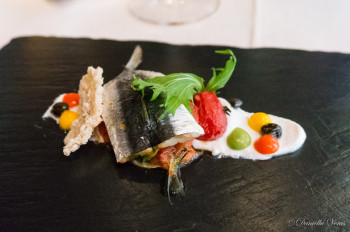 The Rabbit Bon-Bon with Potatoes Mille-Feuille and Artichokes was simply divine. The rabbit had a deliciously succulent and uniquely sirenic flavor. It had a dark meat chicken like texture with an enhanced and gratifying taste. The potato mille-feuille was an original, exquisite and trippy composition of very thin potato sheets combined into one potato cube. It had an onion like consistency that was so tasty. 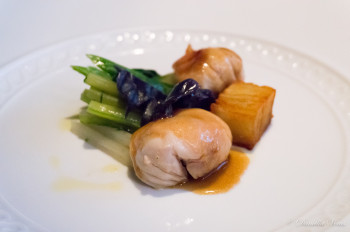 The “Caciucco” Fish Soup with Diverse Pastas and Lime Essence was personally brought out by Chef Gianni and he told us it was dedicated to Miami. Twas such a bountiful, delightful and soothing soup; every bite had velvety succulent seafood and pasta in it. The essence of lime flavor in it satiated our palates like few other soups ever had. There were mussels, fish, various types of pastas and even roasted potatoes in it. Chef Gianni told us that the dish is hot, diverse and close to the sea, which is reminiscent of Miami. 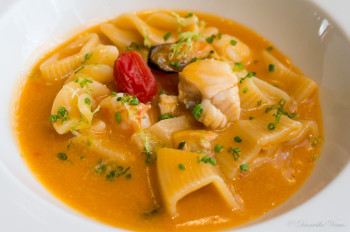 The Black Spaghetti, Sea-urchins, Cress and Candied Peppers was another exquisite looking plate. It appeared as if the kitchen had an artist on staff, meticulously plating the pasta for the ultimate aesthetic appearance. The candied peppers were a flavorful addition to the seductive pasta. Chef Gianni inventively thin sliced a scallion into both the appearance and texture of pasta. 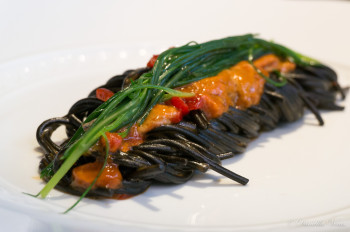 The Lamb Hamburger with Red Curry and Vegetables Mayonnaise was an immaculately juicy diminutive burger that splendidly integrated rosemary with a spicyÂ curry sauce. The purple you see in the photo is a cabbage that the Chef innovatively turned into a delicious and healthy potato chip. 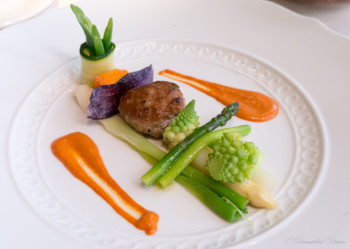 For dessert we had the Pistachios with Pistachios Bavarian Cream and Tangerine Gel. The Sicilian orange peel was candied which gave the dish a tantalizing mandarin scent. It was a dessert that deftly combined sweet, salty and tart through a myriad of different textures all into one bite. It was an inventive treat and a great way to cap off a truly stellar meal. 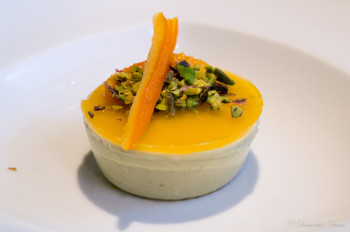 Though Chef Gianni is a man of very few words, he mentioned his inspiration always begins with the vegetables, which permeate throughout all of his dishes. Most diners overlook the pertinence of veggies but most of the spices and flavors that we crave actually stem from them. He calls himself not an artist, but a culinary craftsman. When asked how it felt to receive the cherished Michelin Star that most chefs would literally kill for, with a humble and almost embarrassed smile he simply answered, â€œit felt good.â€ His exalted cuisine combines flavors from all around the globe to create a new interpretation of old school Venetian cuisine