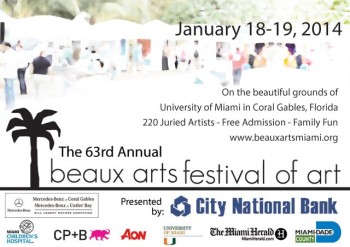 The 63rd annual Beaux Arts Festival of Art presented by City National Bank will bring more than 230 fine art juried exhibitors to the grounds of the Lowe Art Museum on the University of Miami campus on January 18 and 19, 2014.

Widely recognized as one of the regionâ€™s most popular outdoor art exhibitions and a South Florida tradition, the festival attracts thousands of visitors annually and offers works in 10 mediums for a variety of budgets.

Admission and parking are free. Proceeds from the festival benefit the Lowe Art Museum, which will be open to the public all weekend.

The festival will feature live music in the Main-stage tent, childrenâ€™s entertainment â€“ including free art activities for children ages 4-12Â  in the â€œMiami Childrenâ€™s Hospital Art Parkâ€ â€“ and a variety of dining options, making this event ideal not just for art enthusiasts but for families as well.

In addition to artists selected by a panel of jurors, visitors will enjoy the popular â€œStudent Artist Showcase,â€ featuring 150 pieces from Miami-Dade middle and high school students, on display inside the Lowe Art Museum throughout the weekend. A celebration honoring the studentsâ€™ art will take place at 6:30 p.m. on Tuesday, January 14, 2014, at the Lowe. Sponsors of the Student Artist Showcase include Crispin, Porter + Bogusky, Neiman Marcus and Joannaâ€™s Marketplace.

The festival reaches beyond artists and visitors on the festival weekend. Funds raised from the festival help underwrite â€œHands On!â€ â€“ Beaux Artsâ€™ signature program for children from underserved schools. â€Hands On!â€ introduces these Miami-Dade students to the world of art and museums via field trips to the museum. Additional funds raised are used for Lowe Art Museum exhibitions, improvements and acquisitions.

The festival was originally called the â€œClothesline Sale,â€ as Beaux Arts volunteers used clotheslines to display the works of local artists in front of the Lowe. Over 60 years later, the all volunteer-run, annual festival has evolved and is considered one of the top outdoor fine art shows in the country.

For more sponsorship and general information, visit www.BeauxArtsMiami.org, and follow us on Facebook at www.facebook.com/BeauxArtsFestival. Images are available upon request.

Founded in 1952, Beaux Arts is a 100% volunteer organization made up of 100 women and over 300 associates, who fund art enrichment, appreciation and financial assistance to the Lowe Art Museum at the University of Miami. Through major fundraising initiatives such as the annual Beaux Arts Ball and Beaux Arts Festival of Art on the University of Miami Campus, the organization is the largest group financial donor to the museum. Beaux Arts recently won the “White Award,” with which the group was recognized as the University of Miami’s most effective donor and surpassing the $5 million mark of funds contributed to the Lowe Museum. To date, Beaux Arts has hosted over 25,000 children at the Beaux Arts Art Camp and hosted over 5,000 students from Miami-Dade schools for our art appreciation outreach program, â€œHands On!â€. For more information, visit www.BeauxArtsMiami.org