Lisa Corrao joked about how she recently moved back in to her parents house and now envies the homeless for their dignity. She also compared her vagina to a boat because some people are only friends with her because she has one and it requires thousands of dollars of maintenance and is only used like once a month.

Kirk Meadows who sounds like Mike Tyson’s adorable gay cousin, killed it too. He joked about how he calls his daughter “Misty” because she was a mistake and his daughter calls him “Pop” because that is what happened to the condom. He also joked about how McDonald’s gives their employees one premium parking spot to share but, on a McDonald’s salary, nobody can afford a car.

Lando Leyba was also superb telling a hilarious story about being pulled over by a bicycle cop and was afraid that if he got arrested he would have to ride the handle bars into the station. He also discussed how he got a BJ coupon from his wife for his birthday and how some fools wait, but he cashed that shit in right away.

Our friend,Â Forrest Shaw was poignantly funny (as usual) discussing how it would be great if the TV shows “Intervention” and “Hoarders” were combined so a crack head would move into a hoarder’s place and clean that travesty of a mess out in a couple weeks. Lets put our resourceful Crackheads to good use.

The show was a riotous laugh and we can’t wait to see all of these guys (and Lisa) again. Good Luck in La-La-Land Forrest. Â Just remember, no matter what the casting guy tells you, you do not have to toss salad to land a gig. 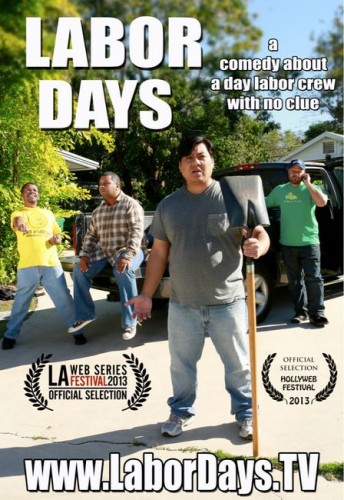 Labor DaysÂ is a comedy series that follows the misadventures of the worst day labor crew in town.Â  In a stroke of monumental bad luck (usually reserved for tv shows), John loses his job, his fianceeâ€™, and his car.Â  Depressed and desperate for money, he decides to join a day labor crew. John soon discovers that working with this wacky crew is far from normal as they tackle the whims of crazy and demanding clients. From cleaning up after a hoarder to sewing campaign t-shirts for an anti-immigration politician, these goofballs will do anything for a buck.Â  This crew is chasing the American Dream one day job at a time.

Labor DaysÂ recently screened at the Independent Film Quarterly film festival in Los Angeles and was also accepted into the 2013 Hollyweb Festival.

Check out some of the episodes at LaborDays.tv