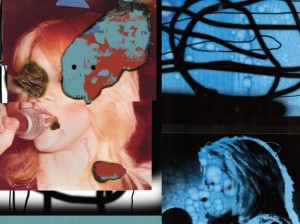 About Compilation:
Scissoring and mixing found imagery, borrowed texts, personal photographs, junior high doodling, cigarette-burned papers, and a copious amount of bratwurst imagery into strange graphic spreads, Compilation is a visual document of different projects that Viking Funeral was involved in. These projects took place throughout 2011 in different cities, including Berlin, Venice, Florence, New York and Miami. Viking Funeral is a sound collaborative made up of Carlos Ascurra and Juan Gonzalez.