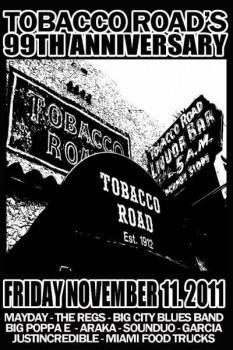 Miami’s oldest bar, Tobacco Road, will celebrate their 99th Anniversary with a huge blowout hosted featuring an epic musical lineup, headlined by Miami’s hottest urban rock band Mayday! This once in a lifetime occasion lasting from 6pm till 5am will feature and Miami Food Trucks, competitons, games, drink specials and tons of music including:
King of the Undergroundâ€ Garcia
The Regs
Tobacco Road’s hero Justincredible
Sounduo
The Big City Blues Band and more to be announced.

The party starts at 6pm with Dj Oski on the set and 99 cent drinks till 7:39, but the party will continue until 5am. Tickets are on sale at Tobacco Road for only $10. For more info call Tobacco Road at 305.374.1198. You can also check out the website at www.tobaco-road.com, Facebook/TobaccoRoadMiami, Twitter/TobaccoRoadBar

Considered Miamiâ€™s Oldest Bar, The Road has survived several Miami land booms, Al Capone, Prohibition, the Great Depression, the country at War, deadly hurricanes, Mariel Boat lift, race-riots, cocaine cowboys, and the rise and fall and rise of South Beach.The Road has been a speakeasy, gambling den, gay bar, strip joint and blues bar. The two-story structure remains virtually unchanged since its inception in the early 1900s. And while ownership has changed, the primary purpose of the establishment â€“ a neighborhood watering hole â€“ has always been the same.