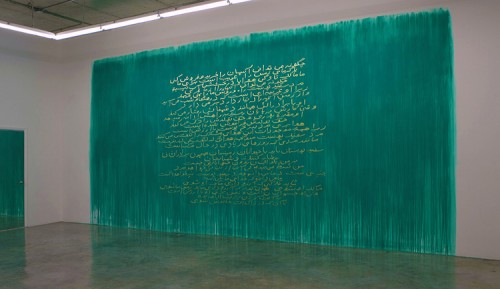 “Into The Void: The Ballad of The Martyr
as Told by Ingres”
CLOSING RECEPTION: SATURDAY, NOVEMBER 14th, 7-10PM.
RSVP at info@charest-weinberg.com

â€œLet me hear no more of that absurd maxim: â€˜We need the new, we need to follow our century, everything changes, everything is changed.â€™ Sophistry- all of that! Does nature change, do the light and air change, have the passions of the human heart changed since the time of Homer? â€˜We must follow our centuryâ€™: but suppose my century is wrong? Because my neighbor does evil, am I therefore obligated to do it also?
Because virtue, as also beauty, can be misunderstood by you, have I in turn got to misunderstand it? Shall I be compelled to imitate you!â€
Jean Auguste Dominique Ingres, c.1834.
Miami, FL â€” Charest-Weinberg Gallery presents the first Miami exhibition of artists Davis/Langlois, Into The Void: The Ballad of The Martyr as Told by Ingres, taking place October 7 – November 21, 2009. This exhibition will showcase work fresh from their exhibition at the Museum of Contemporary Art Chicago (September 5 â€“ 28, 2009), as well as new pieces made specifically for their Miami debut. An opening reception will be held on Wednesday, October 7 from 6 PM to 9 PM.
Davis/Langlois conceived Into the Void as a meta-fable narrated by a resurrected Jean Auguste Dominique Ingres. The story features Iman, a 15-year-old Palestinian-American, as she contemplates the plight of Suquamish leader Chief Seattle, who is forced to relinquish his sacred land to the tune of Black Sabbath and the howls of Soundgarden. In her quest for honor, Iman finds herself hanging on to every prophetic line. Through the tradition of martyrdom in Baroque and Neo-Classical painting, Davis/Langlois explore contemporary notions of assimilation, empire, xenophobia and environmentalism. The exhibition invokes the question â€˜what is honor, and what is honorable? What price does one pay for steadfast commitment and profound devotion?â€™
Rob Davis and Mike Langlois have been artistic collaborators since 1997 after meeting at the School of the Art Institute in Chicago. Redefining the conventional notion that paintings are made by a single artist or hand, each takes an equal role in developing ideas, choosing subjects and executing the works.
Known for their contemporary representational paintings, the duo constructs narratives, each painting acting as part of a larger story and by their proximity, forcing viewers to make a conceptual jump from image to image. With a vocabulary derived from popular culture and subcultures, the artists are committed to applying classical techniques to contemporary art. Their seemingly dissimilar installations center on themes ranging from desire, family, identity, martyrdom, utopia and politics.
About Charest-Weinberg Gallery
Representing today’s top emerging contemporary artists from the United States and Canada, the gallery looks to showcase its ever-expanding, cutting-edge program.
Highlighted artists:
Pedro Barbeito, Suntek Chung, Robert Davis, Richard Dupont, Brendan Flanagan, Michael Langlois, Jason Gringler, Fernando Mastrangelo, Marc Seguin…