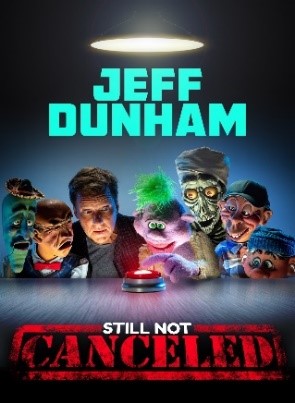 One of the Top Touring Artists of the Pollstar Era, Jeff Dunham, has consistently delivered laughs and shattered ratings with his broadcast specials, global tours, and a best-selling autobiography. His successes have been commemorated with a star on the Hollywood Walk of Fame as well as the Guinness Book of World Records for “Most tickets sold for a stand-up comedy tour,” cementing the ventriloquist as a comedy icon. Dunham’s new one-hour Comedy Central Special, “Me the People,” premiered on November 25, 2022 and became the network’s highest rated stand-up special since his last broadcast, “Jeff Dunham’s Completely Unrehearsed Last-Minute Pandemic Holiday Special” in 2020. This marks a triumphant return to television for the comedy superstar, and he and his cast of world-famous characters now announce the launch of their 2022-2023 tour, Still Not Canceled. Dunham’s North American trek kicks off December 28 taking the fun and laughs to 44 cities. Tickets on sale now at www.jeffdunham.com.