Under the Electric Tree: The Mento Philharmonic Orchestra at Griffing Park in Celebration of Caribbean Heritage Month
Saturday, 06/11/2022, 07:00 pm – 10:00 pm 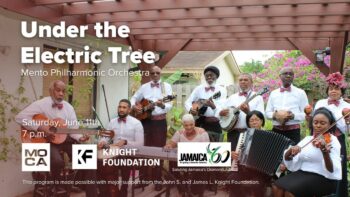 In celebration of Caribbean Heritage Month, MOCA North Miami is proud to feature The Mento Philharmonic Orchestra. Mento is a style of Jamaican folk music that predates and has greatly influenced Ska and Reggae music. Mento typically features acoustic instruments, such as acoustic guitar, banjo, hand drums, and the rhumba box (which is a large mbira in the shape of a box that can be sat on while played.) The rhumba box carries the bass part of the music.

Tallawah Mento Band is a Florida-based Jamaican Mento Band founded with four of the original members of the Jamaica Folk Revue. Tallawah adds its particular flavor to the music of several genres, including the music of Haiti, Cuba, Trinidad and many loved hits from the 50’s and 60’s. With the addition of internationally acclaimed jazz guitarist Keith Stoddart, formerly of the Jamaican Jazz Band “The Sonny Bradshaw Seven,” the band has extended its repertoire to include old jazz, classical, popular, and soca/calypso. The group has entertained all over the US, and recently in Jamaica, and has won numerous accolades. They have also been featured on NBC 6, Radio Waves, Mystic Radio, and Radio WOKB 1600, in Orlando. This program is made possible with major support from the John S. and James L. Knight Foundation.