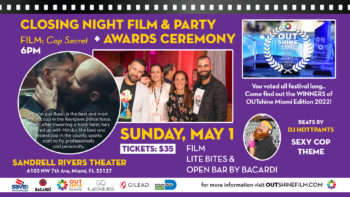 The OUTshine LGBTQ+ Film Festival Miami is back – bolder, brighter and in-person! Internationally acclaimed as one of the largest LGBTQ+ cultural festivals in the world, OUTShine returns for its 24th edition to unite the community through premier social events and programs like its Closing Night Film & Awards Celebration on May 1 that inspire, entertain, educate and encourage a sense of community. “Cop Secret (Leyniliogga)” (2021) (Iceland) will close out the fest with a 6 p.m. screening at the Sandrell Rivers Theater in Miami. The film will be followed by the annual audience film awards soiree featuring light bites, and open bar by Bacardi and entertainment courtesy of DJ Hottpants.

Cop movie clichés have been sent-up before, but this Icelandic action comedy takes the homoerotic subtext of so many buddy movies and unapologetically comes “out” all guns blazing. Rival law enforcers, rough-edged Bussi and slick hunky, ex-model Hördur reluctantly join forces to stop criminal mastermind Rikki Ferrari. Desperate as they are to stop Ferrari’s bank heists, they may just, despite Bússi’s initial denial, want each other even more. Cop Secret embraces the genre’s more ludicrous tropes and gleefully squeezes them tighter. While a hard-hitting action flick, at its core is a tender romance. If Michael Bay made a gay Lethal Weapon…this would be what it looks like.