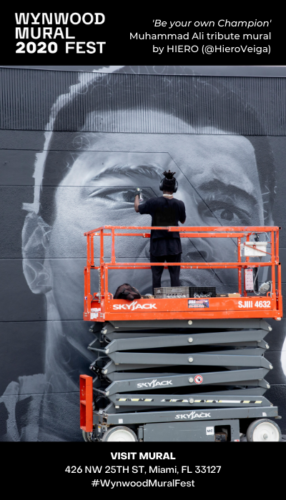 The 40ft wide x 15ft tall artwork is on view at 426 NW 25TH ST, Miami, FL 33127 in Miami’s Wynwood Art District. Titled ‘Be your own Champion’, the mural is one of 10 new project sites featuring the work of more than 60 artists painted in connection with Wynwood Mural Fest 2020, during what would have traditionally been Miami Art Basel Week.

Born January 17, 1942, boxing legend Muhammad Ali had strong ties to Miami. In the 1960’s, Ali broke through race boundaries and transformed from a brash boxer to an outspoken political and religious activist while training on South Beach at the 5th Street Gym and living in Miami’s Allapattah and Overtown neighborhoods. Today, Ali remains a role model and source of inspiration to members of marginalized communities.

ABOUT ARTIST
Known for his portraiture and realistic style, Hiero or Hiero Veiga, is an American contemporary graffiti artist of tremendous work. Hailing from Massachusetts, Hiero grew up writing graffiti in the early 2000’s. Not long after, Hiero made the transition from the street into a thriving career as a professional artist. His work has taken him around the world; in the streets and on gallery and private walls.