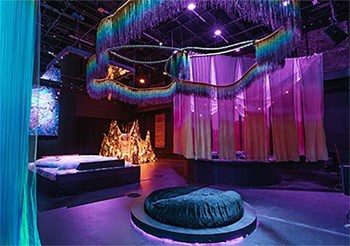 MOAD MDC presents Black Power Naps/Siestas Negras by Navild and Sosa, a multi-sensory, interactive installation designed to provide joyful and relaxing relief from fatiguing systems of inequality. The installation will serve as a platform for several special live events, including Guided Nap Meditations led by the artists and live DJ soundscapes performed from bed.

Black Power Naps/Siestas Negras invites visitors to lounge on a variety of embellished beds, replete with gauzy canopies, serene lighting, therapeutic sound vibrations, and other restorative props. Correlating the exhaustion tactics once used to subjugate slaves with contemporary systems of exploitation and erosive fatigue, artists Navild and Sosa offer this “energetic repair” as a way as a way to “reclaim laziness and idleness as power” for those historically deprived of it.