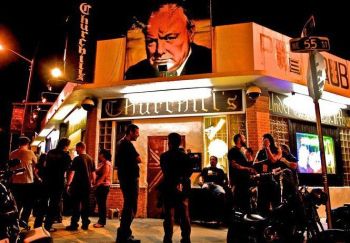 RSVP in advance and let us know you are coming. Join Miami Comedy to get more discounts and invitations on all the laughs happening in our city.

Seats and tables will be laid out in the event space and a variety of shows will be on the stage.
Comedy Line Up includes some great working locals.
Hosted by Miami Comedyâ€˜s own: Manny Garavito!
Lauren and Anthony O’brien

LAUREN Oâ€™BRIEN IS PUNK CABARET
â€¦with a dash of poetry and spices of comedyâ€”fierce fearless and a force to be reckoned with according to international recording artist Rachael Sage. Lauren is constantly evolving.â€¦from actress to lyricist for the rock band PAO (featuring Janice Robinson and Emmy winner Fred Shehadi); from fronting a band in the vein of Patti Smith to writing and performing acoustic rock.

Lauren has played festivals such as NYCâ€™s CMJ Howl! Fest MEANY Fest The Seaside Music Festival The NY Funny Songs Festival and The Joys of Hemp Festival and toured throughout the United States and Canada. Her two studio albums Inconsequential Dream & Panic earned her two New Century Music Awards. Lauren will be releasing new material throughout 2016 The sound is either a love affair between Amanda Palmer and The Pixies or Lene Lovich romancing Charlie Chaplin depending who you ask.
Lauren Oâ€™Brien takes her fans from the spoken word onto a circus ride through never-never land then kicks their rocknroll asses all over town. If you hang out with her after the show who knows where youâ€™ll end upâ€¦
â€”David Tanner RockNRoll Scene