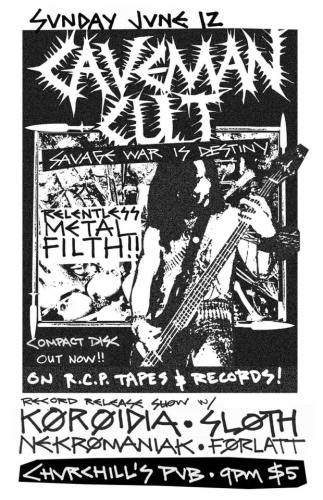 Caveman Cult has been relentlessly churning out some of the most savage death metal to come out of Florida over the past couple of years, gaining notoriety in death and black metal circles worldwide. Since 2014 the band has released two renowned demos, and played a handful of gigs in Florida, Georgia, and Louisiana. 2016 will see the release of their milestone debut full length “Savage War Is Destiny” as well as a vinyl re-issue of their second more obscure demo “Barbaric Bloodlust”. The band will also play this years notorious Cathedral Of The Black Goat festival which takes place in Chicago every October showcasing some of the most obscure and elite death and black metal acts from all over the world.

Alternative MIA and Caveman Cult are extremely honored to celebrate alongside their long time friends and comrades in KOROIDIA (old school death metal played by the truest perpetrators of brutality in south Florida, members of Hibernus Mortis), SLOTH (originally based in Ohio, Sloth is a true legend of the underground, having released hundreds of albums, splits, and EP’s over the span of 20+ years), NEKROMANIAK (South Florida’s old guard & defenders of the faith, Metal played by real deal rock and rollers), and FORLATT (the solo works of Chris Bell, encompassing sounds that span across ambient noise, black metal, and post rock).

Cover is only $5, first band at 9pm. Set times to be revealed soon…