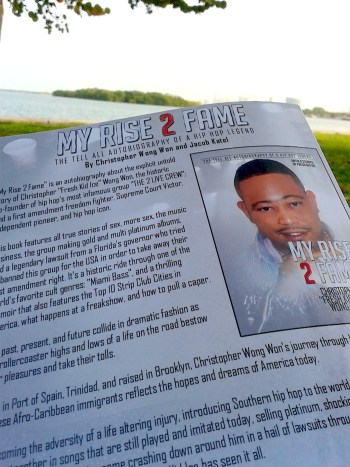 “My Rise 2 Fame” is the autobiography and explicit untold story of Christopher “Fresh Kid Ice” Wong Won, the historic co-founder of hip hop’s most infamous group “THE 2 LIVE CREW.” Chris is a first amendment freedom fighter, Supreme Court Victor, independent music pioneer, and hip hop icon. This book features his all true stories of sex, more sex, and the music business, making gold and platinum albums, and a legendary lawsuit from Florida’s governor, who tried to ban the group and take away their first amendment right to free speech. It’s a historic ride through one of the world’s favorite cult genres: “Miami Bass,” and a thrilling memoir that also features the Top 10 Strip Club Cities in America, what happens at a freakshow, and how to pull a caper. The past, present, and future collide in dramatic fashion as the rollercoaster highs and lows of a life on the road bestow their pleasures and take their tolls. Born in Port of Spain, Trinidad, and raised in Brooklyn, Christopher Wong Won’s journey through life as a Chinese Afro-Caribbean immigrants reflects the hopes and dreams of America today. From overcoming the adversity of a life altering injury, introducing Southern hip hop to the world, bringing sex and rap together in songs that are still played and imitated today, selling platinum, shocking and offending, and then watching an empire come crashing down around him in a hail of lawsuits through graft, mismanagement, greed, and thievery, Fresh Kid Ice has seen it all. Learn about the man and the group, whose music is featured in the movies Boyz N The Hood, Friday, Twins, New Jack City, Project X, and the videogame Grand Theft Auto in a deeply graphic book that reveals never before told stories that will leave you breathless and amazed. In “MY RISE 2 FAME” you will discover that Fresh Kid Ice and the crew inspired legendary Rap acts such as NWA, Cash Money Records, and so many more.