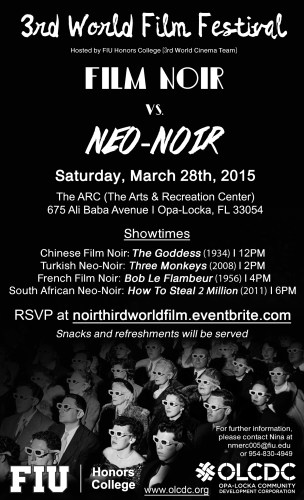 ABOUT THE FILM FESTIVAL

This one-day film festival will explore cinemaâ€™s stylish film noir and neo-noir genres in the developing world. Film noir from the 1930s-1950s is characterized by stark, angular shadows; conflicted anti-heroes; chiaroscuro lighting; determined, beautiful, scheming women; obscured scenes; and isolation in modern cities. Neo-noir addresses philosophical questions about the essence of human nature, guilt, redemption, and problems of knowledge, memory and identity, while blurring the lines between right and wrong, good and evil. Two films per genre will be screened to introduce and expose the art of stylized filmmaking and foreign films in Opa-locka.

FREE public event. Viewer discretion is advised as some films may not be suitable for children.

ABOUT THE FILMS & SCREENING TIMES

12:00 PM – The Goddess (â€œShennÃ¼â€ – 1934, China) â€“ 85 minutes, drama, PG
Street walker by night, devoted mother by day, a woman fights to get her son an education amid criminal and social injustice in China. Dismissed as immoral by scholars during the Cultural Revolution, it is now one of the best known films of Chinaâ€™s cinematic golden age. Directed by Wu Yonggang.

2:00 PM – Three Monkeys (â€œÃœÃ§ maymunâ€ – 2008, Turkey) â€“ 109 minutes, drama, unrated
This strange detective story set in Istanbul traces the journey of a family struggling to stay together and ignore responsibilities by not seeing, hearing, or talking about the truth. Won Best Special Effects at the Golden Orange Film Festival, Best Director at the Cannes Film Festival, and the Golden Anchor Competition Award at the Haifa International Film Festival. Directed by Nuri Bilge Ceylan.

4:00 PM – Bob the Gambler (â€œBob Le Flambeurâ€ – 1956, France) â€“ 98 minutes, drama/thriller, PG
A tribute to classic American gangster films and inspiration for French New Wave filmmakers, Bob Le Flambeur is about an aging gangster and gambler in Paris who navigates the treacherous world of pimps, moneymen and naÃ¯ve associates while plotting one last score: the heist of the Deauville casino. Directed by Jean-Pierre Melville.

6:00 PM â€“ How to Steal 2 Million (2011, South Africa) â€“ 84 minutes, drama/action, ages 16+
A dark crime drama set in gritty, unforgiving city streets, the film follows a robber who gets out of jail and finds that his partner, who never got caught, has married his former fiancÃ©e. Desperate for cash, he agrees to help his partner out with a deviant plan in this South African homage to film noir. Won Best Picture, Best Director, Best Actress in a Supporting Role, and Best Achievement in Editing at the 2012 African Movie Academy Awards. Directed by Charlie Vundla.

Light refreshments and snacks will be served.