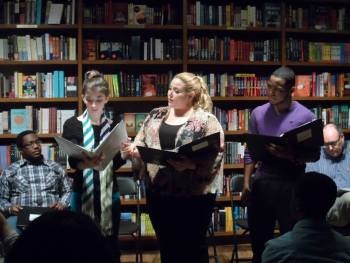 City Reads for CityWrights are fun and informal evenings of new play readings, presented by City Theatre and its acting company, that give audiences a first-hand role in the process that scripts go from page to stage. Audiences serve as critic and supporter, or even as an actor, while having a peek at what makes City Theatre a center for fresh, new works.

These evenings are an entertaining way for audiences to help City Theatre find great plays among the hundreds of submissions that the company receives for its annual Summer Shorts Festival. Summer Shorts is Americaâ€™s Short Play Festival that will take place from June 12 â€“ July 6, 2014 at The Adrienne Arsht Center for the Performing Arts of Miami-Dade County, with an incredible line-up of scripts penned by the countryâ€™s best writers including City Theatre National Short Play Competition winners.

For more information on City Theatre or the Summer Shorts Festival, contact City Theatre at (305) 755-9401 or visit www.citytheatre.com.

The Summer Shorts Festival is made possible with the support of the Miami-Dade County Department of Cultural Affairs and the Cultural Affairs Council, the Miami-Dade County Major and Board of County Commissioners, with support of the City of Coral Gables, and by the following sponsors: Books & Books, Carnival Foundation, Wille Family Foundation, EPIC Hotel, Sabadell United Bank, WLRN, Aventura Limousine, Citizens Interested in Arts and the Dramatists Guild Fund.