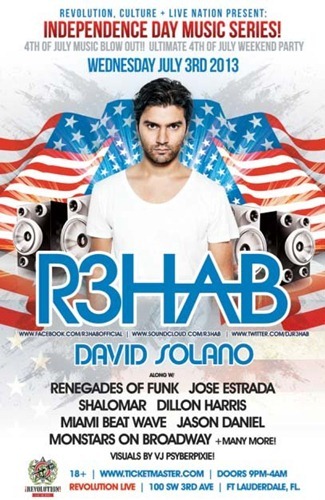 Fadil El Ghould A.K.A. R3hab, firmly established his name in the Dutch dance scene. After the popular remix of Chuckieâ€™s â€œToys Are Nutsâ€ Rehab rapidly gained support from DJâ€™s worldwide. The track â€œMRKRSTFTâ€ became a huge club hit and was featured on the 2008 Sensation White CD. After making successful remixes for the likes of Chuckie, Chris Lake, Laidback Luke, Hi_Tack, Sharam, Rene Amesz and Gregor Salto, it was inevitable that Rehab would show his face on larger events like Fame=DJâ€™s, Dirty Dutch, Rocksteady and one of Hollandâ€™s biggest dance festivals; Mysteryland. R3hab just released a track entitled â€œBlue Magicâ€ on Chris Lakeâ€™s label Rising Music which he produced together with his studio buddy Hardwell. In 2009 he hooked up with another pair of famous Dutch DJ/producers Koen Groeneveld and Addy van der Zwan, resulting in a release called â€œPurple Lightsaberâ€on Koenâ€™s highly respected Technolabel _aBZOluT. R3hab is the highest demanded Dirty Dutch release remixer known.