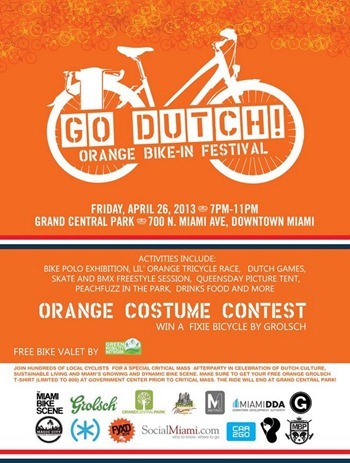 Join hundreds of local cyclists for a special Miami Critical Mass after party in celebration of Dutch culture, sustainable living and Miamiâ€™s growing and dynamic bike scene. Make sure to wear your craziest Dutch-inspired orange costume for a chance to win a brand new fixed gear bike! Also, get to Government Center early prior to critical mass for your free orange Grolsch T-shirt (limited to 800). Admission to this one-of-a-kind event is free and all bar proceeds to go to Grand Central Park for improvements and maintenance to the facility. Go Dutch! will expand on last yearâ€™s festival atmosphere by adding more games and bike-related activities.
ï¿¼
Attendees arriving on a bicycle and Dutch-inspired apparel can enter the "orange costume contest" for a chance to win a custom fixed gear bicycle by Republic Bike. Additionally there will be food, drinks, and music provided by DJ DZA for a special "Peachfuzz in the park".

Miami Critical Mass will meet up at Government Center at 6:30pm as usual, and depart at 7:15pm! The group will ride about 12 miles and finish at Grand Central Park around 8:30pm for the bicycle festival!

The festival coincides with the monthly Miami Critical Mass ride which will be starting as regularly scheduled at Government Center, the only difference to previous rides is that it’ll be ending at Grand Central Park for the celebration, the group of cyclists should be expected to arrive at the park around 8:20pm.

Grolsch will distribute 800 orange t-shirts before the start of Miami Critical Mass at Government Center, it is advised you arrive at 6:30pm if you wish to get a free t-shirt. The limited shirts will entitle participants to $4 special on Grolsch 16oz beers at the park. Everyone is highly encouraged to wear orange!

Green Mobility Network will be providing FREE bicycle valet on a first come first serve basis. Bike valet space is limited so it is highly recommended that you bring your own lock as a precaution, additional on-site self-parking is available for cyclists.

Miami Bike Polo will be playing exhibition games and there will be skate & BMX freestyle sessions at the new DIY skate park area of Grand Central Park.

The Magic City Bicycle Collective will have a table and repair stand set up at Grand Central Park. They will demonstrate simple bike care and do minor bike repairs and maintenance. Buy them a beer or make a donation!