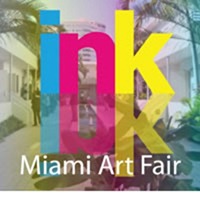 INK Miami Art Fair opens on Wednesday, December 5 at 10:00 am with Â¡Desayuno Cubano! at the Suites of Dorchester, just two blocks from the Miami Beach Convention Center. New this year, the Fair plans to serve cafÃ© con leche and Cuban pastries beginning at 10:00 am on Thursday, Friday, and Saturday to encourage collectors to take advantage of the Fairâ€™s sunny courtyard setting and start their day at Ink Miami.

New This Year! Scope Expands to include Modern Masters

A series of photographic portraits from the late 1990s by Chicago-born and New York-based artist Rashid Johnson will be a highlight at Aaron Galleries. The artistâ€™s major solo exhibition, â€œMessage to Our Folksâ€ was on view at the Miami Art Museum this fall. Dolan/Maxwell will showcase prints and works on paper by Steven Ford, Ryan Parker, and Cheryl Warrick. The Verne Collection (Cleveland), with its special emphasis on rarely-seen contemporary Japanese artists and American artists working in Japan, will exhibit works by Daniel Kelly and Hiroshi Yoshida.

Another new exhibitor, Childs Gallery (Boston), will highlight new works by emerging and mid-career contemporary Cuban artists fresh from this yearâ€™s Havana Biennial. These artists are noteworthy for their commitment to using traditional printmaking as their preferred medium for exploring socio-political issues.