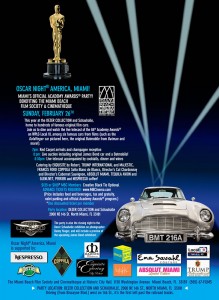 The Academy of Motion Picture Arts and Sciences has selected the Miami Beach Film Societyâ€™s Cinematheque to host the official Miami celebration for the Oscar NightÂ® America, Miami (ONA) viewing party. Oscar NightÂ® America parties are the official nationwide celebrations of the OscarsÂ® and serve as fundraisers for local charities. ONA Miami 2012, presented by Miami Beach Film Society at The Dezer Collection Museum, will take place on OscarÂ® Sunday in Dezer Schauhalle, a one-of-a-kind event venue housing an extraordinary private collection of Hollywood vehicles and memorabilia,

The Oscar NightÂ® America, Miami red carpet and silent auction will be hosted by Miami Beach Film Society founder Dana Keith. Red carpet arrivals and fabulous evening looks courtesy of Ema Savahl Couture will begin at 7:00 p.m. followed by a welcome champagne reception alongside six of the Museumâ€™s famous movie automobiles including Goldfinger, Batman, Back to The Future and The Curious Case of Benjamin Button. As a special treat to car aficionados and Hollywood films buffs, the original Batman â€œBatmobileâ€ and James Bond â€œDB5â€ from Goldfinger will go up for live auction at 8.pm. The evening will proceed with a seated dinner and viewing of the live telecast of the 84th Academy AwardsÂ® on WPLG Local-10 (ABC) starting at 8:30 p.m. (EST). Attendees will toast OscarÂ® winners while enjoying Exquisite Catering by Robert with Sofia Blanc dâ€™ Blancs, Directorâ€™s Cut Chardonnay and Directorâ€™s Cabernet Sauvignon by Coppola Wines, Absolut Vodka, Perrier, and Nespresso, while bidding on items during the eventâ€™s silent auction.

The celebration will also serve as the closing night of the Dezer Schauhalleâ€™s renowned Bunny Yeager Retrospective currently on display, as well as a preview of the Museumâ€™s upcoming James Bond collection slated to open Spring 2012, which will feature the automobiles, airplanes and boats that appeared in one of Hollywoodâ€™s most celebrated film franchises. The evening promises an experience that exudes the classic glamour and luxury of the 84th Annual Academy AwardsÂ®, complete with the Academy AwardsÂ® show program booklet for all guests.

The Dezer Collection Museum, founded by prominent New York/South Florida developer and collector Michael Dezer, features more than 1,000 of the most unique and eclectic vehicles held in any private collection in the world. The 250,000-square-foot contemporary art and automobile museum features a total of nine exhibitions, and one-of-a-kind concepts including an indoor drive-in movie theatre. Exhibitions include American classics from all eras, rare European classics, military cars, microcars, classic motorcycles and more. The museumâ€™s Hollywood â€œStarâ€ car exhibition showcases cars featured in some of Hollywoodâ€™s most celebrated movies, including the 1948 Ford â€œGreased Lightingâ€ from Grease, 1959 Cadillac â€œExcto-1â€ from Ghostbusters, 1981 Delorean â€œTime Machineâ€ from Back to The Future, and the Mach 5 Speed Racer from Speed Racer Enterprises, among many others.

In addition to the extraordinary collection of vehicles and memorabilia, the Museum offers a one-of-a-kind event venue, the Dezer Showplace, that is perfect for hosting birthdays, bar and bat mitzvahs, weddings, corporate parties and auctions, among other events. The Dezer Showplace features a total of 75,000 square feet of event and entertainment space, split into several ballrooms that can accommodate parties of every size, from intimate gatherings up to 1,500 guests.