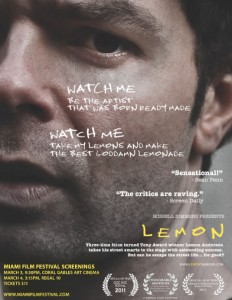 Three-time felon, one-time Tony Award winner, Lemon Andersen is an acclaimed poet who broke out on Broadway in Russell Simmons’ Def Poetry Jam. But Lemon has landed back in the projects, living with thirteen family members and desperate for a way out. He turns to the only things he has left, his pen and his story. This beautifully crafted film follows his efforts to stage a comeback at New Yorkâ€™s Public Theater as he battles demons from his past.

While crossing paths with Spike Lee and other tastemakers, Lemonâ€™s life personalizes the anguish of men clinging to the margins of society but fighting for something more. The film features music by hip-hop phenoms Kanye West, Mos Def, Talib Kweli and Aloe Blacc. The beats of music and rhyme give the film an energy that will stay with you for a long time to come. – Thom Powers

Lemon Andersen And Co-Director Laura Brownson Are Expected To Be Present And Answer Questions Following The Screenings.