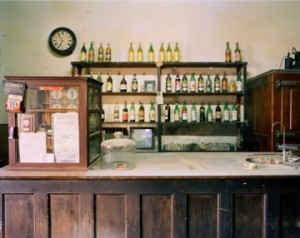 Dina Mitrani Gallery is pleased to present Short Stories by Guillermo Srodek-Hart, opening on Thursday, February 9 at 6pm and on view through March 30th 2012. This exhibition includes images taken during the artistâ€™s travels to remote rural towns outside of Buenos Aires. With his 4×5 film camera, he captures cluttered old shops and bars that have been frozen in time. His complex compositions deliver rich color images with densely overflowing content, giving the viewer’s eye an innumerable amount of detailed information to observe. Accompanying the photographs in the show are texts that glimpse further into the lives of the people that the artist encounters in these isolated towns.

â€œMy photographs are filled with traces of human presence: objects, furniture, stuff hanging from the walls, accumulations on display. They speak to me of the invisible, that which can’t be seen but is there, stories to be imagined, and, ultimately, the acknowledgement of our own transience in this world.”
Guillermo Srodek-Hart (b. 1977, Argentina) studied at the School of the Museum of Fine Arts and Tufts University, Boston, and received his MFA from Mass College of Art. He was awarded the Klemm Prize in 2005 and the PetrobrÃ¡s Award 2006, both in Argentina. In 2008, he was among the 30 artists chosen to be part of the book Contemporary Argentine Art, Artista X Artista. His work is included in the North Dakota Museum of Art, the Santa Barbara Museum of Art, and the Kiyosato Museum of Photographic Arts in Japan.