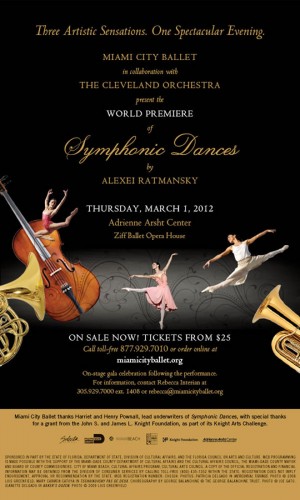 This historic one night only event brings together two of the world’s most acclaimed companies in dance and music, and the most talented and sought-after choreographer working today, in celebration of Miami City Ballet’s 26 years of artistic excellence. It will be an unforgettable tour de force, showcasing the artistic strengths of Alexei Ratmansky, Miami City Ballet’s dancers and The Cleveland Orchestra’s musicians – artists who are at the heights of their careers.

Gala tickets are $1000 each, which includes prime orchestra seating followed by a celebration dinner dance on the stage of the Ziff Ballet Opera House. Tickets can be purchased by calling Rebecca Interian at (305) 929-7000, ext. 1408 or email rebecca@miamicityballet.org. Proceeds from the gala will support the future artistic endeavors of Miami City Ballet. Tickets to the performance only range in price from $25 to $170 and are on sale at miamicityballet.org or by calling (305) 929-7010 or toll-free (877) 929-7010.