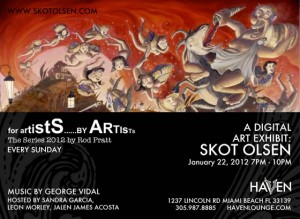 Join us on Sunday, January 22nd as we present the comprehensive artists program “for artists…..by artist.” The evening will be dedicated to painter: Skot Olsen

Skot Olsen (b. 1969) uses a classical, yet comical, visual style, which he has called “cartoon realism,” to convey complex themes. Each piece is rich with symbolism, no matter whether it is a six foot tall “neo-psychedelic” painting based on the artist’s spiritual experiences with psychedelic plants, or a small format depiction of a ship at sea being taken down by a giant squid.

Through the years, Olsen has become best known for his maritime work, and has received a wide fan base among scientists and others who are interested in the plight of the giant squid. The artist conducts copious research to develop pieces that are historically accurate, and even educational. Inspired by 19th-century maritime artwork and a love for giant squid, Olsen’s maritime themes focus on strange and often perilous encounters humans have with the sea and the things that dwell there.

In 2007, Olsen launched a series of work that is referred to as his “neo-psychedelic” series of paintings. The objective of this work was to create a religious iconography around the use of hallucinogenic plants, depicting saints and apostles who glorify and represent the plants and the states of mind derived from them. Seeing a shift away from conventional religion and more toward an ethnobotanical path to spirituality. Olsen intended to communicate that humans are hard-wired with a need to connect to the eternal, and that the use of such plants/chemicals are a different path leading toward higher states of consciousness, which is also possible through religion or meditation. This body of work was destroyed in a fire while on display at the Harold Golen Gallery in Miami during Art Basel December 2007.

Following the blaze that destroyed two years of his work, Skot Olsen returned to paintings of the sea. Perhaps it was a subconscious way of easing the pain of loss, in the way that a dip in the ocean has the power to heal, both spiritually and physically. The work that ensued in 2008 combined the religious iconography from the “neo-psychedelic” series and Olsen’s earlier work depicting maritime themes. The artist ended the year 2008 with a solo show at The Shooting Gallery in San Francisco. From oceanic disasters to the commercial harvest of sea monsters and Poseidon himself, the show was a demonstration of the will to persevere, create and communicate through painting. Olsen’s current body of work explores propaganda, New World Order, and environmental themes.

The evening does not end at 10pm, we go till 2am