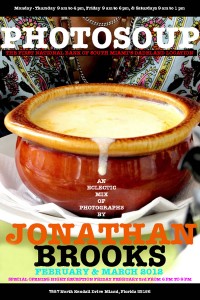 “It’s a hodgepodge of shots from some of the different series or projects I’ve worked on recently,” says Brooks. “There’s a little bit of something for everyone.”
The exhibit includes all types of photography, including portraits, abstracts, landscapes, and more. Color, Black & White, and Sepia techniques are all also represented. The First National Bank of South Miami has a history of showcasing local, national, and international upcoming and established artists in South Florida.

One minute you are looking at a Dalmatian or Peacock, then a Cuban coffee or cigar. And all the images carry a hint of a South Florida/Miami vibe. You can also get a glimpse at a few of his works from his 2005 South Miami 32 Bites exhibit that took place during Hurricane Katrina.

“I’m used to his amazing portraits and beauty shots, but I think this collection really shows his diversity as a photographer,” says Coral Gables Make-up Artist Elena Zelicscovics.

His art and writing can also be found at in his Jonathan Brooks Visual Arts shop at JonathanBrooksPhoto.Etsy.com. Through his own JDB ebooks he has PDF file ebooks and calendars available.

Brooks’ Photosoup exhibition starts the first of February and runs through the end of March. It is a free event open to the public. The bankâ€™s Gallery is a public art space that is open Monday through Thursday from 9 a.m. to 4 p.m., and Friday from 9 a.m. to 6 p.m. Saturdays the gallery is open from 9 a.m. to 1p.m.

Jonathan Brooks is an award winning photographer, whose work has been exhibited in Art Basel Miami, New York City, and the United Kingdom. His studies in graphic design and architecture, and extensive backgrounds in the fashion industry and music industry have helped to influence his work.

The story and images detailing the renovation of his condo appeared nationally in Venus magazine. He has numerous photography exhibitions to his credit and is currently working on his next.

Jonathan worked for Eastman Kodak for some time during the transition from film to digital, as well as some other major companies. Highly proficient in computers, he has been using them since before AOL even existed.

He is a rare Miami native and is bilingual. He currently writes and photographs reviews for GreatFoodList.com and is the shop owner of Jonathan Brooks Visual Arts on Etsy.com.