MAM Playlist Party at The Standard Spa with Dana Schutz 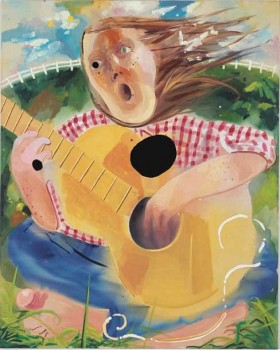 Dana Schutz, one of the most important young painters to emerge in the past ten years, combines an absurdist sensibility with vibrant color and tactile brushwork. Among her many imaginative scenarios, she has used music-related subjects to springboard into ideas about monumentality, angst, and the construction of pop icons including, “The Breeders” (2002), an image of indie rock duo Kim and Kelly Deal; “Her Arms” (2003), a massive painting of Kim Gordon, founding member of Sonic Youth; “50 Foot Queenie” (2003 ) rock singer-songwriter PJ Harvey in; and “Autopsy of Michael Jackson” (2005). These, along with her 2008 series of paintings of bizarre obsessions, â€Iâ€™m intoâ€¦â€, (which include conceptual gardening, minimalist tattoos), and gravity and multiple references in interviews to music, prompt us to want to hear what Schutz is really into listening to in the studio these days.

The Playlist Party is hosted by Esther Park and takes place monthly at The Standard Spa, Miami Beach.