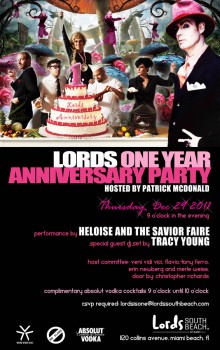 Lords South Beach – the first gay boutique hotel brand in the US â€“ is turning one!
To celebrate, Lords is throwing a fabulous One Year Anniversary Party. Famous â€œNew York Dandyâ€ Patrick McDonald will host, accompanied by a special co-host committee made up of Lords’ closest friends and supporters, including Veni Vidi Vici, Flavia, Tony Ferro, Erin Newberg, and Merle Weiss. There will also be a performance by Heloise and the Savoir Faire and special guest DJ set by Tracy Young.

Looking back on the hotelÊ¼s whirlwind first year, Lords has established itself as a cornerstone of South BeachÊ¼s LGBT community while playing a significant role in the resurgence of Miami’s gay scene – as The New York Times noted in an article this month, Lords South Beach has truly become Miami’s “gay hub.” From glittery parties and drag performances to game nights and cabarets, Lords has become a cultural and community headquarters. Gay icons like Amanda Lepore, Joey Arias, Richie Rich, Cazwell, and Ladyfag have all hosted high-profile events and helped create a buzz around Lords South Beach. In addition to cultural and community events, Founder Brian Gorman prides himself on giving back to the community that has supported him over the years, which is why he has made charity a priority at Lords South Beach. In addition to hosting luncheons and benefits for nonprofit organizations, Lords donated over $10,000 through its Rooms That Matter program, for which 10% of select room sales are designated to LGBT charities, including Aqua Foundation, Lambda Legal, Hetrick-Martin Institute, The Point Foundation, and Care Resource.

Lords also strives to make the Miami experience welcoming for visitors. As the vanguard for the modern gay boutique hotel, Lords has conceptualized a variety of initiatives that intersect the cutting edge of innovative hospitality and gay culture, such as the Out-N-About app. Developed by Lords in partnership with Out Magazine, Out-N-About features advice on LGBT-friendly activities in Miami from handpicked experts in a variety of fields: shopping, culture, outdoors, and nightlife. With Out-N-About, newcomers can explore Miami like a pro, thanks to tips tailor-made for them.

All of this has helped put Miami back on the map for gay tourists. According to the 2011-2012 Gay and Lesbian Tourism Report, Miami significantly increased its LGBT tourism in the past year and jumped back onto the top 10 vacation destinations for LGBT travelers. Lords embraces all the qualities that attract the LGBT traveler: fun events, an inviting price point, a central location, and â€“ of course â€“ a gay-friendly atmosphere.

Looking ahead to 2012, Lords South Beach will continue to build relationships with the local and LGBT community at large, attracting new and returning visitors to South Beach. Guests and locals can look forward to their favorite parties like the weekly Cabana Boy, and the hotel will continue to bring fresh personalities to South Beach to revitalize the gay scene. LordsÊ¼ ongoing charitable contributions will continue throughout 2012, with plans to involve additional LGBT organizations.