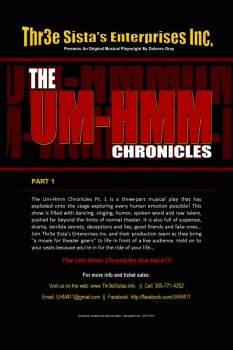 The Um-Hmm Chronicles Pt. 1 is a three-part musical play that has exploded onto the stage exploring every human emotion possible! This show is filled with dancing, singing, humor, spoken word and raw talent, pushed far beyond the limits of normal theater. It is also full of suspense, drama, terrible secrets, deceptions and lies, good friends and fake onesâ€¦ Join Thr3e Sista’s Enterprises Inc. and their production team as they bring “a movie for theater goers” to life in front of a live audience. Hold on to your seats because youâ€™re in for the ride of your life.