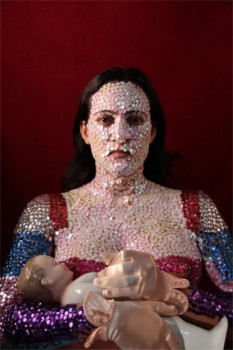 Created by artist Ryan Oduber, the 2011 Caribbean spotlight award recipient for his cinematography of the short film “Muhe Frida” on the life of Frida Kahlo during the 2011 Aruba International Film Festival, Kima Momo is a carnavalesque commentary on the machismo culture in the Caribbean. In his own words: “At the end of the carnival season the personification of Carnival on a figure of a man, called Momo, or King Momo is being burned on a stack as a symbolic gesture to take along the sins of man so he/ she can vast and repent in sole tranquility. But the carnival never ends. The carnival groups start working right away on new design for next year and young girls get transformed by the hormonal change in their pregnant body. Teenage pregnancy is at its peak during the carnival season in Aruba and the Caribbean due to excessive use of alcohol and drugs.

The modern man and woman are reflected back to the Madonna and Child. The mother is being portrayed as the dominant figure in the family, or single mom, and has a central role in the development of the beauty pageant queen daughter and the cruel macho man/ son. Bloodline derived from the divine mother as to habits and culture. Boys don’t cry and girls are sweet and beautiful.

The Payette’s, sequins, represents the carnival beautiful of the body. Everything looks more beautiful with sequins. She has over 5000 sequins on her face and chest. The gloves are beauty pageant glove used for the carnival queen beauty pageant election. She is standing still and caresses the baby boy doll on his belly and slowly holds his hand as to conform him on his journey into adulthood and his role in society as a man/macho.”

This video art presentation will culminate with a VIP reception on Saturday, December 3 which will feature a performance by Alydia Wever, who appears in the film as the Madonna figure.

This presentation has been curated by Renwick Heronimo and will incorporate an additional sound effects/track by Micheal Lampe.