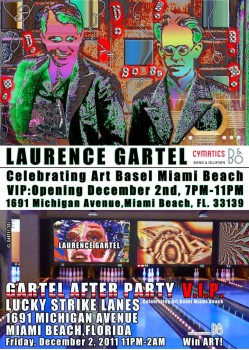 Be a part of the unveiling of Bang & Olufsenâ€™s new Beovision 4-103inch, 3-D High Definition, Plasma Television, valued at $130,000.00. Imagine feeling totally absorbed and a part of the action in your favorite 3D film. Bang & Olufsen will take you there with their new 3D technology.

In addition to the video/animation, time based work, the impresario of Digital Media will have additional surprises; with the unveiling of his latest Rolls Royce “1989 Themed” Spirit art car. Art historian Pierre Restany once declared Gartel a “Fabulist,” in his Introduction to the Italian monograph, “Gartel: Arte e Tecnologia.” Mr Gartel will once again live up to that title. -Coming off hosting the Star Gala and creating the official artwork for the event honoring John Secada the show should prove to be another stellar star event. )) Artist website: gartelmuseum.weebly.com

Be part of The V.I.P. Red Carpet event where Lucky Strike will be serving passed hor dâ€™oeuvres, Zacappa will be sharing their elixser from the gods and Russian Standard beauties will be passing their tempting libations. This event will be filmed and simulcast to the Intl Art Convention of Rome, Italy.