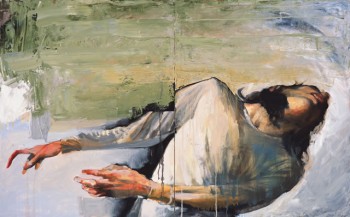 101/exhibit continues its mission to discover, promote, and preserve the works of great contemporary artists. The Miami gallery is proud to present, Undertow, an exhibition of new works by Jason Shawn Alexander, the Los Angeles-based Expressionist figurative painter. The show opens on Friday, December 2 through February 8, 2012, and coincides with the publication of a comprehensive book about the artist and his work, also called Undertow.
Alexander’s masterfully rich figures inhabit settings that, at times, evoke the stillness of theater. The paintings offer the viewer a glimpse of private moments, captured in the wake of a great receding void. Alexander’s intense personal narrative combined with overtones of allegory, the paintings are imbued with an essential human drama that is his signature quality.

An expert draftsman, Alexander has developed a method for mounting paper to canvas, which enables him to use his inks at the idea’s inception. He draws with fluidity and an energy he has long sought to bring to his paintings. The ink serving as a gestural skeleton, the artist then uses models to help pull out realism and sculpt the flesh of his pieces. His intimate works penetrate to the core of human integrity, often depicting images of figures wrenched in that critical space where the strained coordination of mind, body, and spirit, hangs in the balance of existential woe.

A reviewer from ART NEWS was moved to write, “Recalling Bacon’s portraits, the figures seem to cry out… Alexander’s impassioned application of oil paints underscores the barely contained violence of the visions, lingering like intimations of half-remembered dreams.”

Abstract elements now and again emerge by way of exaggerated gestures, elongated limbs, the doubling or tripling of images, hints of apparitions, or the intrusion of foreign materials and text into the paint, which satisfy the rich psychological nature of Alexander’s work.

The artist will attend the VIP opening, December 1st from 7:00 – 10:00 p.m. and a second reception on December 2nd during Miami Design Night. The gallery will be open for viewing during all Miami Design District events December 2nd, 3rd, and 4th.