Subliminal Seduction – A Night of Art and Comedy! 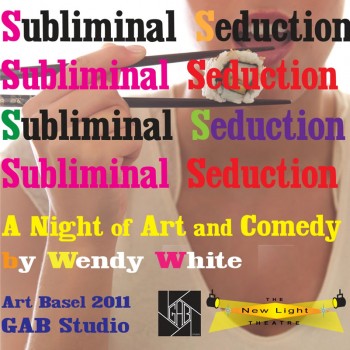 Introducing the revolutionary concept of LIVE performances in combination with the visual arts!

Subliminal Seduction is a series of one-act comedies totally inspired by true life experiences where joy and seduction are found in the most unusual of placesâ€ states playwright Wendy White, â€œexpect the unexpected at your favorite Sushi Bar, Minit Mart, Happy Hour, Laundromat, by working as a Temp and by cutting your Hair!â€

Wendyâ€™s newest series of large abstract impressionist paintings will be on display at the same location at GAB Studio during Art Basel. â€œCombining art and theatre during the largest art show in the world is a dream come trueâ€ states Wendy. â€œI am forever grateful to Bridges Aderholdt, gallery owner of GAB Studio who was the first to say â€œyesâ€ to perform our plays at his gallery. Thanks to Bridges opening his doors to the New Light Foundation and The Krane, we went forward to perform off-Broadway in New York City, at the Edinburgh Fringe Festival in Scotland, in Hollywood, California and our new venue in Fort Lauderdale at Gallery 101, thanks to Gallery Director, Adam White seeing our production at GAB Studio in May of this year; â€œThe New Light Theatreâ€ was born!

The playwright and director, Wendy White has written over 120 one-act plays and was a resident playwright, curator and director at the Kraine Theater in the East Village of New York City from 1984 to 1992, and at the Expanded Arts Theater Company from 1994 to 2001, in the Lower East Side of New York City. Her off-Broadway productions are the base for her new venue at the New Light Theatre. She recently produced The Jewish Nun to sold out audiences in Off-Broadwayâ€™s 59e59 Theatre and at the Edinburgh Fringe Festival in Edinburgh, Scotland.