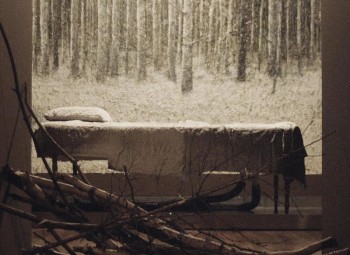 Miami Art Museum presents the U.S. debut of Schneebett, a major installation inspired by Ludwig van Beethovenâ€™s convalescence and death in Vienna, Austria in 1827. The reception will feature a performance of Beethovenâ€™s late quartets by members of the Miami Symphony Orchestra. Schneebett, originally created for the Berliner Philharmonie in 2004, will be on view in the Museumâ€™s permanent collection installation from October 14, 2011 through January 1, 2012.

Miami Art Museum will present the United States debut of Enrique MartÃ­nez Celayaâ€™s Schneebett, a major installation inspired by Ludwig van Beethovenâ€™s convalescence and death in Vienna, Austria in 1827, originally created for the Berliner Philharmonie. Enrique MartÃ­nez Celaya: Schneebett will be on view from October 14, 2011 through January 1, 2012 in the Museumâ€™s Anchor Gallery, a space dedicated to large-scale works from the permanent collection. The exhibition opening will take place October 13, 2011 from 6 to 8pm and feature a performance by members of the Miami Symphony Orchestra.

Schneebett, which reflects on and transports the viewer into the final hours of Ludwig van Beethovenâ€™s life, was the first work of art commissioned for and exhibited at the Berliner Philharmonie since its founding in 1882. It was presented in 2004, and was shown in juxtaposition to the music of the Berliner Philharmoniker with special programming at the American Academy in Berlin. Schneebett was presented again in 2006 at the Museum der bildenden KÃ¼nste in Leipzig where it offered a counterpoint to Max Klingerâ€™s statue of the heroic Beethoven as the creative genius. The title, Schneebett (â€œSnow-bedâ€), is from a poem by Holocaust survivor Paul Celan, a meditation on death. To re-animate the spirit of those celebrated exhibitions, MartÃ­nez Celaya created a new version of the installation for Miami Art Museum, which opens with a performance of Beethovenâ€™s late quartets by the Miami Symphony Orchestra. A video of the performance will be on view for the duration of the exhibition.

The three-part installation conveys Beethovenâ€™s final moments in Vienna, far away from his native Bonn. In one room is a bronze bed, its surface covered in a thick layer of frost created by an elaborate compressor system. Behind it is a large tar-and-feather painting of a dense, snow-covered forest. The entry to the room is blocked by a pile of sticks and branches. On the other side of the blocked doorway is an â€œante-chamberâ€ with a solitary chair from which a viewer can peer into the inaccessible â€œbedroom,â€ and experience the environment as a memory of what was, or what might have been. The Leipziger Volkszeitung remarked that Beethovenâ€™s presence â€œliterally hovers in the air as sound.â€

â€œSchneebett is a major work by an internationally-renowned artist,â€ said MAM Senior Curator Peter Boswell. â€œIt will have a special resonance here in Miami since MartÃ­nez Celaya, who was born in Cuba, was inspired in part by the thought of Beethovenâ€™s passing away far from Bonn, the city of his birth, which he left at age 21 never to return.â€

Schneebett is a promised gift to the museum from German collectors Dieter and Si Rosenkranz.

Born in Habana in 1964, Enrique MartÃ­nez Celaya worked primarily as a scientist until 1992, when he decided to be an artist, an endeavor he had been pursuing since an early apprenticeship during his teenage years. Marie Louise Knott, editor of Le Monde Diplomatique, which dedicated an entire issue to the artist, stated, â€œMartÃ­nez Celayaâ€™s work reinvents the original magic of art.â€

MartÃ­nez Celaya studied applied physics at Cornell University and, supported by a fellowship from the Brookhaven National Laboratory, pursued a Ph.D. in Quantum Electronics at the University of California, Berkeley. As a scientist he worked on superconductivity, lasers and laser delivery systems, research for which he was issued an often-cited patent. He attended the Skowhegan School of Painting & Sculpture in Maine and received a Master of Fine Arts from the University of California, Santa Barbara. His work is represented in such public collections as the Museum of Modern Art, New York; Museum of Fine Arts, Houston; Metropolitan Museum of Art, New York; the Museum of Contemporary Art, Los Angeles; the Museum der bildenden KÃ¼nste Leipzig; Los Angeles County Museum of Art; and the Whitney Museum of American Art, New York. He has been the recipient of numerous distinguished awards, including most recently, the honor of being the second Visiting Presidential Professor in the history of the University of Nebraska, and the prestigious Anderson Ranch National Artist Award. Recently, the University of Nebraska Press released Enrique MartÃ­nez Celaya: Collected Writings & Interviews, 1990-2010, which traces the development of the artistâ€™s thought throughout his twenty-year career as an artist, writer, and lecturer.

For a comprehensive archive that documents the making and reception of the work, please see www.schneebett.com.