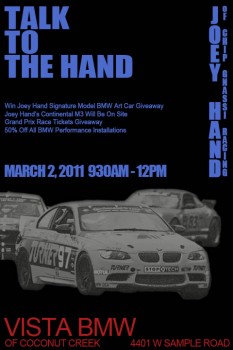 24 Hours of Daytona winner Joey Hand to appear at Vista BMW
GRAND-AM points leader to promote upcoming Grand Prix of Miami
Coconut Creek, FL â€“ February 23, 2011 – Joey Hand will be appearing at Vista BMW of Coconut Creek to promote his participation in the next event for the 2011 GRAND-AM Rolex Sports Car Series – South Floridaâ€™s own Grand Prix of Miami, held March 4-5 at the Homestead Miami Speedway.

Hand will be appearing at Vista BMW of Coconut Creek on the morning of March 2, 2011 from 9:30AM-12PM alongside a street-legal 2011 BMW M3 custom-fit with an impressive array of BMW Performance Parts including the new M Performance Exhaust System. He will be making this public appearance to discuss the upcoming Grand Prix event and promote the full line of BMW Performance Parts and Accessories.

Joey Hand arrives in South Florida with the first win of the Rolex Series under his belt: he and his three co-drivers earned a first place finish at the Daytona 24-hour endurance event on January 29. The vehicle that earned his team the victory was a BMW Riley. Hand will be appearing with â€œNumber 97â€, his Continental BMW M3.

Fans will have an opportunity to receive autographs and enjoy photo opportunities with the champion and his BMW M3. Several BMW â€œArt Carsâ€, precision scale models adorned with Joey Handâ€™s autograph, will be raffled to a few lucky participants. There will also be a giveaway of two tickets to enjoy a full weekend (March 4-5) of Grand Prix of Miami racing.

Joey Handâ€™s team, Chip Ganassi Racing, hopes to secure another win at the Grand Prix of Miami event on March 5, 2011 against a full roster of some of the best and most recognized names in motorsports. Fans wishing to meet Joey Hand in person and possibly win tickets to the race are invited to attend his appearance at Vista BMW on March 2, 2011. For the full details on the event, please contact Vista BMW.

GRAND-AM Road Racing, founded in 1999, popularized major league sports car road racing in North America and is recognized as one of the most competitive road racing organizations, attracting the talent and attention of numerous motorsport celebrities.
Vista BMW, one of the worldâ€™s largest BMW dealerships, operates out of South Florida. For the last five consecutive years, Vista BMW is honored to be recognized as North Americaâ€™s #1 BMW Dealership in Retail Sales. They offer the full range of BMW vehicles and services. They are located at 4401 W Sample Road in Coconut Creek, and 744 North Federal Highway in Pompano Beach. They can be contacted by phone at (888)619-9747.