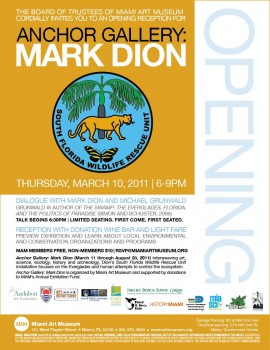 Anchor Gallery: Mark Dion, presenting the artistâ€™s complete South Florida Wildlife Rescue Unit, a large-scale installation focusing on the Everglades and human attempts to control the South Florida ecosystem, opens with a dialogue between the artist and Michael Grunwald, author of The Swamp: The Everglades, Florida, and the Politics of Paradise (Simon and Schuster, 2006). South Florida environmental and conservation organizations will be present during the opening reception with information about local programs.

Miami – February 17, 2010 – Miami Art Museum presents Mark Dionâ€™s complete South Florida Wildlife Rescue Unit, a large-scale installation that focuses on the Everglades and human attempts to control the South Florida ecosystem. The installation will be on view from March 11 through August 28, 2011 in the Anchor Gallery, an area of the Permanent Collection featuring regularly changing presentations of large scale works. The South Florida Wildlife Rescue Unit was originally commissioned by MAM in 2006 and subsequently acquired by the Museum.

â€œDionâ€™s installation tells the story of the various mentalities and motivations, both positive and negative, which have determined our history with Floridaâ€™s wilderness,â€ said Peter Boswell, Miami Art Museum assistant director for programs/senior curator. â€œThe artist has said that his work is not really about nature, but about the consideration of ideas of nature. His project resonates with the environmental changes the South Florida region has undergone and the efforts that are being made to stem and counteract those changes.â€

The largest component of the installation features a facsimile of a vehicle and equipment belonging to an imaginary agency that rushes into vulnerable ecosystems to save threatened plants and animals: the South Florida Wildlife Rescue Unit. This portion of the installation serves as a tongue-in-cheek how-to guide for would-be conservationists, and ironically represents the dreams of policymakersâ€™ decisive actions, while also saluting past and current grassroots activism efforts.

The second portion of the installation is a series of reproductions of vintage photographs taken in the early decades of the 20th century by John Kunkel Small, a curator of the New York Botanical Garden who identified numerous plant species in the Everglades and authored a scathing book entitled From Eden to Sahara: Floridaâ€™s Tragedy, which documented the changes wrought by dredging and draining the area.

The third portion is comprised of a vitrine containing artifacts, including a book of pressed specimens, the Herbarium Perrine (Marine Algae), purportedly belonging to 19th century botanist and early Florida settler Henry Perrine. Perrine was partly responsible for the overzealous introduction of foreign plant species to the area, which now poses one of the gravest threats to the ecosystem. Like the installationâ€™s vehicle, the vitrine and its components are a fiction invented by the artist.

Mark Dion was born in New Bedford, Massachusetts in 1961. His work deals with the probing of knowledge systems that underlie scientific research and museum displays, acquisitions, and classifications. He received an honorary Ph.D from the University of Hartford and is a recipient of the Larry Aldrich Foundation Award. Dion studied at the School of Visual Arts and the Whitney Museum of American Art Independent Study Program in New York, and the University of Hartford, Connecticut. Dion has showed in solo exhibitions at a number of venues, including the Aldrich Contemporary Art Museum, Ridgefield, Connecticut (2005), The Museum of Modern Art, New York (2004), and the University of Tokyo Museum, Tokyo (2002).

In conjunction with Miami Art Museumâ€™s Anchor Gallery: Mark Dion and the upcoming exhibition, The Wilderness, Miami Art Museum will partner with local environmental and conservation organizations to provide information on local initiatives, and special programs. For information on participating institutions, visit miamiartmuseum.org or email tbelcher@miamiartmuseum.org.