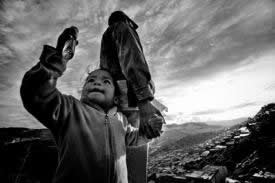 “Invisible in the City: Lives of Urban Refugees” has toured Shanghai, Geneva, Milan, and New York.
To illustrate the resilience of refugees in cities, their hopes and dreams as they struggle to simply survive, make a living and care for their families, United Nations Higher Commissioner for Refugees (UNHCR) sent renowned photographer ZalmaÃ¯ Ahad, to urban settings in Colombia, Malaysia and South Africa. At age 15, Ahad spent three months in his grandmotherâ€™s basement hiding from the Soviet army before fleeing to Switzerland, where he was educated and still lives.
Internationally acclaimed photographer Zalmai’s work has been published in several magazines and newspapers, including the New York Times Magazine, Time Magazine, Le Temps, Newsweek and La Republica.
Fort Lauderdale is the only host city for the 50-piece exhibit in South Florida during the limited US tour. Exhibition runs January 10 – 15, 2011.