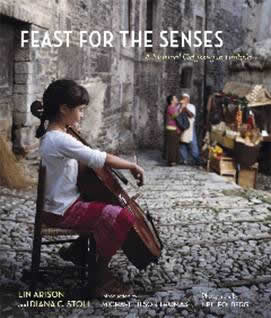 Bal Harbour resident Lin Arison presents her latest book, Feast for the Senses, A Musical Odyssey in Umbria, at two different readings this winter. Part memoir, part travelogue, this lushly illustrated multi-media book showcases New World Symphony musicians performing in the most beautiful and rare Italian locations, and features all the sites, foods, crafts and festivals that give the Italian region of Umbria its unique character.

Feast for the Senses was co-written by Diana C. Stoll, with an introduction by Michael Tilson Thomas and original photographs by Neil Folberg.
The book is also about falling in love with two things at once, â€œa process that was so exhilarating that I knew I had to share it,â€ Arison writes. â€œIn these pages, we invite you to accompany us on our voyage â€“ and partake in the feast.â€