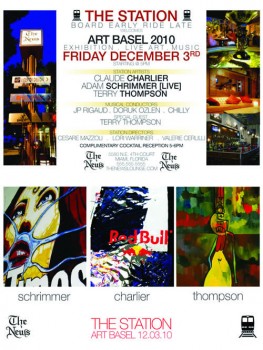 Part Visual Artist, DJ, producer, and modern day renaissance man. As a producer, this veteran dj hit the big leagues with his international smash hit â€œShineâ€ on the Defected UK label. His track was featured as a New Essential Tune on Pete Tongâ€™s BBC Radio show in 2007. Also released during the WMC conference that same year and played by djs from all around the world. Terry is no stranger to Art Basel or Miami. He performed at various venues in South Beach over the last 5 years.

Join us as one of our favorite underground house dj return for a special ART Basel addition at The Station at The News Lounge in Miami.

Artaholics may have their ArtBasel Miami schedule planned out, but a comprehensive trip is not complete without a visit to The STATION at the News Lounge ArtBasel exhibition. Curator JP Rigaud assembled a fascinating group of mid-career artists that are reshaping the landscape of contemporary art. Terry Thompsonâ€™s (a Chicago-born artist) large scaled abstract paintings are a familiar blend of Picasso, Miro, and Basquiat with magical twist. Thompsonâ€™s distinct bold colors and encryptions of miniature like shapes and symbols require major decoding. Like all masterpieces, his works are mysterious with many hidden clues to a purposeful allusion.

Also exhibiting are French Photographer Claude Charlier and Adam Schrimmer. Charlier is known for his fashion and artistic photos. Adam Schrimmerâ€™s art can be scene throughout Miami in various public spaces including some of hottest hotels in South Beach. Schrimmer will perform live paintings during the exhibition.