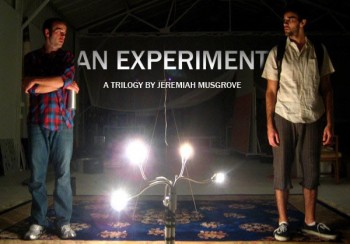 Directed by Stephen Elliot Kaiser, this brand spankinâ€™ new play features two freelance scientists (played by J. Musgrove and S. E. Kaiser) on a mission to manifest an idea in the universe. Conducting a series of inept public experiments, they stumble into an â€œidea specialistâ€ (Melissa Almaguer), who joins their cause. In spite of early disappointments–their spaceship never comes out of the ground, they spend all their money on drugs and narrowly escape being sucked through a space portalâ€”together, they finally manage to â€œactuateâ€ something â€¦And here is the best part! MRTC invites you to be a part of the experiment November 19th and 20th at 8pm for, get thisâ€¦ only $7!!! Low cost, high quality theatre in Miami is now a reality. So come be a part of it! And as an added bonus, arrive early or stay late and enjoy new works by visual artist Jose Felix Perez (www.josefelixperez.com). Doors open at 7pm.