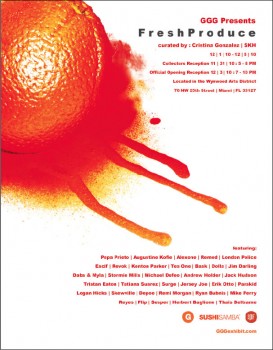 Graffiti Gone Global (GGG) launches its fourth consecutive year with an exhibition of street and graffiti art running parallel to Art Basel Miami Beach. Entitled Fresh Produce, GGGâ€™s installation explores the gray area between the street and the gallery, while adopting the quintessential farmersâ€™ market mantra of â€œfresh.â€ Powered by SUSHISAMBA Fresh Produce is curated by Christina Gonzalez â€” aka She Kills He â€” and will feature work from todayâ€™s top street and graffiti artists, as well as a collaboration with Operation Design and a new large-scale installation by Dutch artists Haas & Hahn. Fresh Produce is produced in collaboration with Primary Flight and will be housed in a 7,000-square-foot venue in the Wynwood Arts District and will open to the public on December 1. A reception will be held on Friday, December 3 from 8 – 10pm.