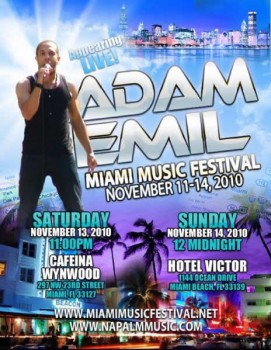 Chicago’s own up-and-comer Adam Emil has been invited to perform at the Miami Music Festival – a conference/showcase dedicated to emerging artists and new music. Adam will bring his blend of hip hop-influenced R&B/soul and represent Chicago to the fullest over two nights. Emil has been crowned as an Apollo Legend, won B.E.T.’s ‘Ya Heard’ new artist competition, was WGCI’s first ever “Hometown Hero”, won the Top Pop Artist Award for most money grossed on the #1 online booking site, Gigmaster.com – and he’s just getting started!

Check Adam out on MySpace: www.myspace.com/napalmmusic