MOC Holiday Boat Parade
Saturday, December 18 at 7:00pm
down the waterways of Miami and Biscayne Bay. Viewing site at Bayside

The Holiday Boat Parade presented by the Miami Outboard Club, is an integral part of the City of Miami’s Holiday Magic celebrations, which each year brings residents together to benefit the children of Centro Mater Child Care Services, a non-profit organization. 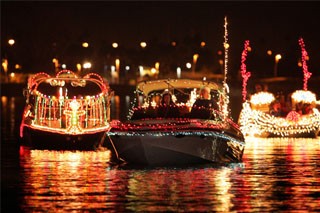 The first annual Holiday Boat Parade was organized by the Miami Outboard Club in 1998 in an effort to attract residents and tourists to Biscayne Bay, Downtown Miami and surrounding areas during the holiday season. Nearly two dozen enthusiastic boat captains joined in the fun, decorating their boats and parading in the Bay waters adjacent to the Club. Over the past 12 winter seasons, the Holiday Boat Parade has grown in size and scope, attracting club members and non-members alike. Over the past few years the event, has featured more than 70 boats, and nearly 100 are expected this year.

This year’s parade route offers numerous locations from which locals and tourists alike can enjoy the marvel. Beginning at the Miami Outboard Club, the parade heads towards Miami Beach, passing Monument Island and crossing beneath the Macarthur Causeway between Monty’s South Beach and the U.S. Coast Guard Station. The parade route continues along Government Cut towards Downtown Miami, passing the Miami Children Museum, Bayside and Bay front Park. The parade route will turn around at Brickell Key, once again passing Bayfront Park, Bayside, and then American Airlines Arena. As the parade makes its way back to the Miami Outboard Club, boats motor beneath the McArthur Causeway Bridge and then pass Jungle Island and Miami Yacht Club. 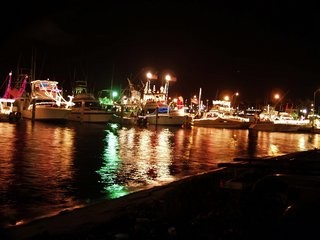 The fun doesn’t end at the Parade’s finish line, Immediately following the parade, Miami Outboard Club will host a Dance Party for parade participants, their families, guests. During the post-parade party, prizes are awarded for best-decorated boats in a variety of categories.

The Annual Holiday Boat Parade is made possible through the ongoing cooperation of the U.S. Coast Guard, Coast Guard Auxiliary, Miami-Dade Marine Patrol, The City of Miami Police Department, The City of Miami Beach Police Department, and the generous support of individual and corporate sponsors. With increased participation and support from Miami’s business community, the Miami Outboard Club hopes to make the Holiday Boat Parade the largest of its kind in Florida.