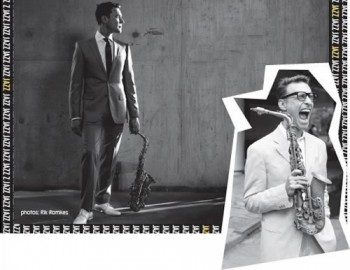 New Jazz from the Netherlands
As part of the New Cool of the jazz scene in the Netherlands Benjamin Herman blows away every clichÃ© while working hard to return jazz to the dance floor, and building bridges between the mainstream, improvisational jazz and the pop scene. He began his career when he received a saxophone as a bar mitzvah present. Since then, Benjamin has become known as the hardest-working, sharpest-dressing and most original musician in the Netherlands. He is the winner of several Edison awards (the Dutch Grammys). Joining him are some of Holland’s finest players. Bassist Ernst Glerum has worked with Steve Lacy, Lee Konitz, Han Bennink and John Zorn. Guitarist Anton Goudsmit has worked with Tony Allen, Han Bennink and John Zorn, and is a founding member of the Ploctones. Anton appeared here at the Byron Carlyle two years ago with Eric Vloeimans. Drummer Joost Patocka performs with the Beets, Carolyn Breuer, Ernst Glerum, Jazz Cats, and Five Up High.
“Benjamin Herman seems to re-invent himself for each CD. While his style and sound remain recognizable, his borders extend each time.” Jazz
“This is music that also scores high on an international scale … with this release he will likely become too big for our country!”
â€“ Jazzism Magazine (Netherlands)
Read more about Benjamin Herman at benjaminherman.nl