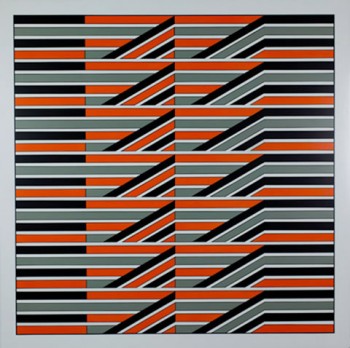 The Patricia & Phillip Frost Art Museum at Florida International University (FIU) will host the opening receptions for four major exhibitions: Embracing Modernity: Venezuelan Geometric Abstraction; Sequentia by Xavier Cortada; Selections from Anomie 1492-2006 by Arnold Mesches and La Habana Moderna in The Wolfsonian Teaching Gallery at The Frost Art Museum as part of The Museum’s Target Wednesday After Hours programming series on Wednesday, October 13th, 2010 from 6:00 p.m. to 9:00 p.m. located at 10975 SW 17th Street, Miami, FL 33199. The event is free and open to the public.

Coming on view is Embracing Modernity: Venezuelan Geometric Abstraction which presents a historical overview of the origins of Venezuela’s abstract movement, focusing on its early development dating from the late 1940’s to the 1960’s. It includes works by artists who were responsible for the growth of the movement at the national and international level, particularly in Paris where many of them resided at the time. The show, curated by Francine Birbragher-Rozencwaig and Maria Carlota Perez, features works by Omar Carreï¿½o, Carlos Cruz-Diez, Narciso Debourg, Gertrude Goldschmidt (Gego), Elsa Gramcko, Carlos Gonzalez Bogen, Gert Leufert, Mateo Manaure, Alfredo Maraver, Nedo, Ruben Nuï¿½ez, Alejandro Otero, Mercedes Pardo, Jesus Rafael Soto, Victor Valera, and Oswaldo Vigas, among others.

The selection of works from private collections and Foundations included in the exhibit document an important period of Venezuela’s art history, which was instrumental in the development of Modern Art in the Americas. Paintings, sculptures and installations illustrate the development of Venezuelan Geometric Abstraction and Kinetic art, and introduce many artists who contributed to the movement in Venezuela, unknown to the American public. On view through January 2nd, 2011.

Florida Artists Series: Selections from Anomie 1492-2006 features Florida artist, Arnold Mesches. Throughout his 65-year career as an artist and professor, Arnold Mesches has woven many narratives into lush and virtuosic paintings. Beginning in late-1989 and until mid-1996 Mesches created the ANOMIE series, paintings and collages that included overt and subtle references to the overlapping histories and multi-cultural aspects of life. The 48 large acrylic paintings and 150 collages encompassed postmodern concepts with old master techniques and structures. In these works, large canvases of cinematic proportions, nothing is overt, images move and mingle freely through time, find their place conceptually, independent of actualities. In a broader sense, they are the conceptual admixtures of reality and the surreal Mesches has been striving for over these many years of painting and activ ism. This series incorporated pertinent, often disparate, historical and personal images. It seems to be a summation of Mesches’ collected views on the world’s madness and inconsistencies, on beauty and ugliness, evil and justice, on life over death. Mesches has exhibited extensively throughout the United States and abroad, most recently at PS1 Contemporary, the Museum of Modern Art affiliate. On view through December 5th, 2010.

Sequentia, Xavier Cortada’s solo exhibit at the Frost Art Museum explores the sequence of events that make up life on the planet from the molecular to the monumental. The title of the exhibit also references a series of actions Cortada will set in motion to create of a unique strand of DNA. The artist will work with a molecular biologist to synthesize an actual DNA strand made from a sequence generated by museum visitors using Cortada’s art. In “The Four Nucleotides”, the artist creates large scale “portraits” of Adenine, Cytosine, Guanine and Thymine – the four bases of a DNA strand that summarize all we are, were and will be. In Sequentia, the artist invites museum visitors to randomly select a post card depicting one of Cortada’s four nucleotide oil paintings and attach it sequentially on strings hanging in the form of a helix from the exhibit gallery’s ceiling. In stringing the n ucleotides along, they develop a DNA strand as a participatory installation.ï¿½On view through January 2nd, 2011.

In La Habana Moderna, Habana is the focus of the next exhibition in The Wolfsonian Teaching Gallery at The Frost Art Museum on view in the fall of 2010. By presenting a variety of materials from the collection of The Wolfsonian-Florida International University (magazines, photography, architectural drawings, tourist ephemera, and other media), it explores how international commercial and cultural links contributed to the emergence of a modern identity for the city in the decades before the Cuban Revolution. The exhibition is made possible by financial support from the Andrew W. Mellon Foundation. On view through January 2nd, 1011.

Target has teamed up with The Frost Art Museum to sponsor an event series designed to complement The Frost’s exhibitions. These events give visitors the chance to meet contemporary artists and engage with controversial art, live music, talks, films, dance, and performance art, while providing an excellent opportunity to socialize with other people interested in the arts. For information on future Target Wednesday After Hours, please visit http://thefrost.fiu.edu/wah.ht