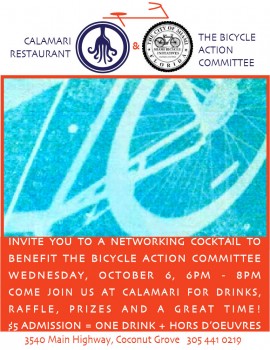 Come Out In Support Of A Bike-Friendly Miami!
Join Us Wednesday, Oct. 6 From 6-8 At Calamari!
To RSVP, rcahlin@mallahfurman.com

Wednesday, October 6, 2010
Calamari Restaurant (3540 Main Highway), Fund raising cocktail for The Bicycle Action Committee 6:00 – 8:00 PM, $5 Admission includes, one drink ticket and hors dâ€™oeuvres, with all proceeds going to The Bicycle Action Committee (BAC), an organization which was formed in 2008 as a means to facilitate the City of Miami to move forward to become a Bicycle-Friendly City. The BAC is composed of representatives from various City, County, State and local community individuals, business owners, and cycling advocates. The BAC was responsible for the creation of the 2008 Bicycle Action Plan which set in motion the 2009 Bicycle Master Plan to make the City of Miami a Bicycle Friendly City by 2012. for more information, contact Richard A. Cahlin at rcahlin@mallahfurman.com