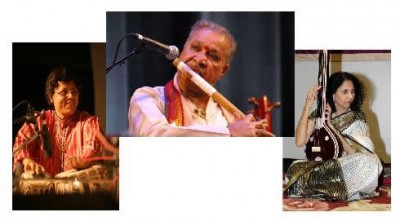 The renowned Pandit Hariprasad Chaurasia, considered unparalleled for his mastery of the bansuri (bamboo flute), has performed throughout the world winning acclaim from various audiences. He has collaborated with some of the worldâ€™s greatest musicians such as John McLaughlin, Jethro Tull, George Harrison, Mickey Hart, Jan Garbarek, Egberto Gismonti and Larry Coryell. Today he is one of the most sought after contemporary musicians in the world.

Immediately after the concert there will be a fundraising dinner held in the Abdo New River Room. At this event all in attendance will have the rare opportunity to meet Pt. Hariprasad Chaurasia. A portion of the proceeds will be given to the Association of the Performing Arts of India in support of its Educational and Community Outreach programs.