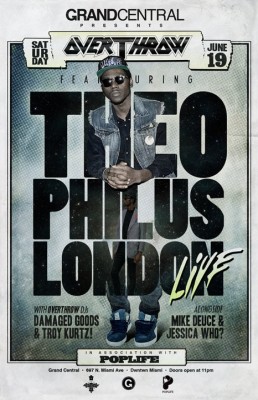 Over a year ago, we at Overthrow heard an incredibly talented and unique musician named Theophilus London and knew he would be a perfect fit for a Miami rager. After tracking him down through several continents, we brought him to Miami for a couple of shows that were even more then we expected.

Since then, Theophilus London has grown into a huge international artists, making tracks with everyone from Mark Ronson to Sam Sparro, and being flown around the world for huge shows. he recently released a new mixtape I WANT YOU that rocked the internet and as music critics everywhere anticipating his full length album.

Now, we are proud to bring him back to Miami for a special LIVE performance to start the Overthrow monthly party at Grand Central in downtown Miami.

Overthrow DJ’s TKO, Damaged Goods, and Troy Kurtz will be spinning alongside residents Mike Deuce and Jessica Who?

Brought to you in association with our friends Poplife.