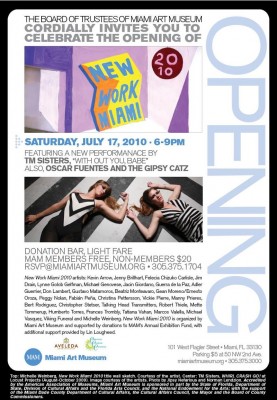 June 10, 2010 â€“ MIAMI â€“ Miami Art Museum, a modern and contemporary art museum located in downtown Miami, FL, will provide a partial snapshot of the Miami art scene at this moment with New Work Miami, opening Sunday, July 18, 2010 and closing on Sunday, October 17, 2010. This Miami Art Museum-organized exhibition is conceived as an exuberant salute to Miamiâ€™s artistic community, which is bursting with dynamism and sophisticated artistic points of view.

Approximately 35 artists based in the Miami area will present new and recent artworks executed in a variety of media including painting, sculpture, drawing, photography, video, environmental installation and performance. The bulk of the exhibition will be presented in Miami Art Museumâ€™s recently unified 5,000 sq. ft. Plaza Level Gallery, with numerous performances, events and screenings to be presented throughout the exhibitionâ€™s run.

â€œThe aim is to connect Miami Art Museumâ€™s broad audience â€“ which includes a full spectrum of Miamiâ€™s population, from avid art followers to the general public â€“ with the exciting and innovative artistic developments unfolding right in our backyard,â€ said Peter Boswell, MAM assistant director for programs/senior curator. â€œNearly every aspect of the production, from the gallery notes, to the title wall, to the sounds in the elevator, will be created by artists in an effort to activate the museum artistically as much as possible.â€

Many of the artists are creating works for the exhibition that reach beyond the museum walls, including the Talking Head Transmitters, who will broadcast interviews with both scheduled guests and walk-in MAM visitors over live AM radio. On the lobby monitors, a video artwork by Tatiana Vahan, which depicts scenes from the artistâ€™s childhood embodying a typical, middle-class American family, intermittently interrupted by real TV commercials. Gean Moreno and Ernesto Oroza will turn the exhibitionâ€™s gallery notes from a traditional museum brochure format to a tabloid newspaper that will be distributed at various public locations throughout the city. Other artworks will challenge visitorsâ€™ perceptions, such as Don Lambertâ€™s Flatland, a large sculpture with rapidly spinning circles that create the illusion of a vortex-like dept, and an optical phenomenon of suggested color. Felecia Chizuko Carlisle will return regularly throughout the run of the show to continue transforming the installation of â€œSketchesâ€ in space.

â€œMore than ever the key to participating in global cultural conversations is to speak from within oneâ€™s local conditions,â€ says RenÃ© Morales, MAM associate curator and co-organizer of the exhibition. â€œIn Miami, we have a richly textured artistic community, one that is increasingly able to make strong and internationally relevant contributions.â€

In line with Miami Art Museumâ€™s commitment to community outreach and education, the exhibition will be supplemented with special performance events, artist talks and interactive programs throughout the course of the project. To receive event invitations and reminders, visit miamiartmuseum.org.

New Work Miami is organized by Miami Art Museum and is supported by donations to MAMâ€™s Annual Exhibition Fund. It is curated by Peter Boswell, assistant director for programs/senior curator, and RenÃ© Morales, associate curator.

Miami Art Museum serves one of the most diverse and fast-growing regions of the country, where a confluence of North and Latin American cultures adds vibrancy and texture to the civic landscape. MAM embraces its role as a cultural anchor and touchstone in a city that welcomes countless ethnic and age groups, lifestyles and ideas. MAMâ€™s far-ranging vision is expressed in the breadth and depth of its exhibition program, and its ambitious education and public programs. The Museum continues to build its collection of holdings from the twentieth century through the present, as it embarks on a major new building and expansion project. The new MAM designed by Herzog & de Meuron will open in downtown Miamiâ€™s Museum Park in 2013.