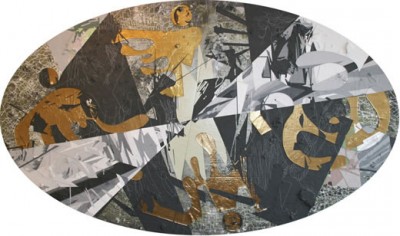 Opening preview June 4th at 6PM
There will be an after party held in the gallery from 8PM-10PM
featuring music by Bhakti Baxter.

The Charest-Weinberg Gallery is pleased to present Within an Arrows Range, an exhibition of new paintings by Pedro Barbeito. This will be the artistâ€™s first solo show at the gallery following a remarkably successful two-person outing last year.
Pedro Barbeito came to prominence in the late 90s as the leader of a group of abstract painters challenging Modernismâ€™s prevailing notion of terminal flatness through architectonic strategies of superimposition, lamination and tiling. For this new generation of painters, Modernismâ€™s insistence on simplified order through a program of ever-increasing regimentation, measurement and precision in the hopes of revealing a sense of naked spiritual purity shorn of any â€œmessyâ€ figurative signifiers, had seemed to run its course. Much like a precarious, teetering Jenga toy, whose last geometric block has just been removed, abstract painting before the ubiquity of digital imaging technologies seemed about to collapse under the weight of its own empty, Greenbergian rhetoric. To set the record straight: Never before had Modernismâ€™s innately reductive impulse been so strenuously challenged by a vanguard crew of painters raised on — and prone to — expressions of aggregation, accumulation, and density.
While today it seems as if every aspiring painter has at some point dabbled with Photoshop, satellite image-grabs, and 3D modeling programs (as well as the attendant editing programs used to tweak and manipulate them), it bears mentioning that a mere fifteen years ago, the notion of an abstract painting as an archive or repository of built-up, sedimentary layers was practically heretical. Had this been Salem circa the early 19th Century, Barbeito would certainly have been the first apostate to be burned at the stake. In hindsight, we now see that even his first conscious stabs at â€œexplodingâ€ the Modernist grid and gathering the resulting â€œshrapnel,â€ so to speak, were pioneering efforts to level the playing field between the assumed artificiality of the digital archive and the equally stereotypical presumption of the artistâ€™s subconscious imaginary as the sole locus of authentic creativity.
But as Barbeitoâ€™s original generation has become fully historicized and the battle lines are drawn between a growing techno-aided Baroque on one hand, and the deep subjective interiority of a new generation of quasi-naÃ¯ve, deskilled Abstract-Expressionists on the other, Barbeito himself has been actively dissolving these same boundaries between the figural and the abstract, the vaguely humanoid and the resolutely gestural on his own terms. Such divisions, he would argue, are handed down after the fact anyway by critics and cultural theorists alike, who are eager to demystify or perhaps hasten the obsolescence of what in the end cannot be demystified â€“ that is to say, the artistâ€™s own recombinant, ever-organic, insistently morphing attempts at creating a deeply personal, wholly unique visual language.
Though Barbeito would be the first to argue that the most elusive thing about painting itself is its application (and woefully inadequate approximation) of word to image, he nevertheless has found inspiration in this current show in the Greek, mythological figure of Scyllla, the once beautiful maiden transformed into a 12-tentacled, devouring monster by a jealous God. The comparison with paintingâ€™s own history is unavoidable here: a lush, otherworldly siren song that seduces and entraps even as it continues to puzzle and confound.
Since Barbeito well knows that technology and especially the consumer electronics industry are chiefly driven by capital accrued from pornography, he is interested in re-enchanting a sense of sublime wonder in the female form lost in the endless patriarchal objectification of your average downloaded streaming mpeg file. Pornographyâ€™s own compression of scale, flattening of image, extreme foreshortening, not to mention the sheer teeming jumble of limbs and tendency toward airbrushed, idealistic perfection is the kind of infantilizing wish-fulfillment that smacks of the artificial. In his own words, then, he describes his new paintings as a â€œmerging of the painterly (pouring, splattering and brushing on paint), and the digital (acidic colors, faceted shapes, grids and pixels) to create a Frankenstein-like form of representation that critiques the notion of the very concept of the natural and the authentic as always already mediated by fiction and technology.â€
Pedro Barbeito is a graduate of the Yale School of Art. Born in La Coruna, Spain in 1969, he now lives and works in Brooklyn, New York. His work has been exhibited internationally and resides in important collections all over the world. This is his 10th solo exhibition overall.