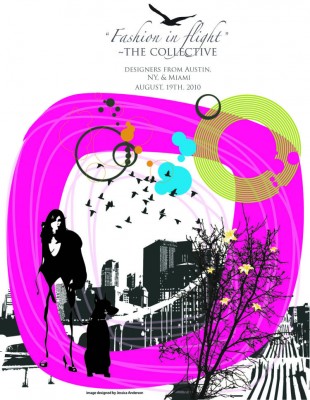 An original, explosive and â€œexperientialâ€ fashion show to celebrate emerging designers from the US with a focus on Austin, New York and Miami. This event will take place during Austinâ€™s annual Fashion Week. Over 250 exciting and notable guests will attend — an energetic, high-end charity fashion show in downtown Austin, including after-party at the exquisite Hotel Saint Cecilia. Guests will enjoy a true runway fashion show, doggie fashion show with the opportunity to â€œadoptâ€, â€œin-flightâ€ themed entertainment, the opportunity to talk to and shop with local accessory boutiques and designers, while mingling and grooving to the sounds of a New York DJ . The official media sponsor for our event is Rare Magazine. Models will be provided by Wilhelmina Brown. Styling and hair will be done by Jose Luis Salon.

During Austinâ€™s Fashion Week, one of the most exciting events of the week will occur on Thursday, August 19th, 2010. This benefit event will be a remarkable evening with proceeds going to the charity, â€œAustin Petâ€™s Alive.â€ Bon Vivant LLC, and Jessica Rae Anderson will make over the Mexican American Cultural Center with an â€œIn Flightâ€ theme, for a night of fashion, DJâ€™s & live music, as well as great food and drink from local eateries. Models will grace the catwalk from Wilhelmina Brown.

Bon Vivant LLC, Nichole Wright, in Austin, Texas & Jessica Rae Anderson, Lifestyle Stylist, who is based in Miami, Florida, decided to host the â€œFashion in Flightâ€ for many reasons. Both women spent over ten years in New York City most recently and wanted to bring the excitement of a â€œtrue runwayâ€ Fashion Week to Austin and both have adopted dogs in the last year. â€œWe really wanted to host a unique event that nurtures the design and fashion industry, gives participating brands international PR reach and supports an animal charity.”